My Friday is your Saturday.  Nice.  Honestly, I should start prepping myself for the 6 consecutive workdays which are going to begin on Wednesday.  I have a suspicion they're going to be slow.  We have customers, and we're making $$$, but I suspect many have overdosed on Home Improvements.  We'll see.

I adjust my Chewy order this morning.  Can we talk complicated.  I'm switching the pooches back to Beneful for a while.  I ended up cancelling the Autoship and setting up a 2nd.

And for those of you who don't know, EF Pro, the cylcing team I follow, won yesterday's stage on the Tour de France with a sprint... on a climb.  At 13 mph, they called it a slow motion sprint.  Here's the clip.

While talking to an associate at work yesterday, I mentioned the fact that the Idiot Jerk in the White House hasn't mention a single syllable regarding the fires out west.  This morning I saw that the Washington Post also brought up that hot topic.  They and I both reached the same conclusion:  talking about death and destruction of Americans requires empathy, a  capacity to understand and share that horrifically emotional experience.  That's something he can't do.  This is the nature of selfishness.
And, except for his base, people are wondering how someone who brags himself up as a successful businessman could have screwed up the finances of his campaign so badly.  The Idiot Jerk is now facing a perfect storm for fund raising hurdles.  This is mostly because his campaign did blow through $800 million in just a few months.  After he loses in November, I suspect there will be investigations into his campaign cash catastrophe and they'll discover much of the $$$ was spent at entities he owns, and to Ivanka Danka, Donnie Jr, and Eric because the greedy don't care where their wealth comes from.
Sadly, the bad fish I put in a small, separate tank has died.  I saw him floating upside on the bottom last evening.  I felt a little bad.  If he hadn't been attacking everything else he'd still be alive.
And, finally, here's another one of my Dahlias. 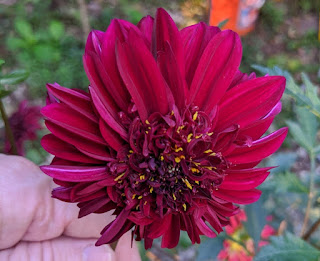