Today's the last day of September,.  It's also my first day off after working 6.  Following my SOP, I usually stay up later watching movies.  Last evening, rather than torture myself with the debates, I watched The Old Guard.  While I enjoyed this Science Fiction / Action movie, I thought the plot too simplistic: immortals fight to keep Big Pharma from getting their DNA.  At the end I realized The Old Guard was really nothing more than a 2 hour set up for a sequel. 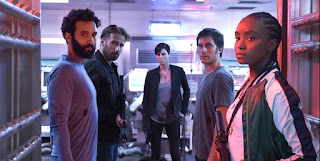 Oh, and evidently there was something that in very lose terms could be called a debate last evening.  As I said, I didn't watch it.  Reading through the news this morning it devolved into something less civilized than most were expecting.  While some are saying Biden, on occasion, allowed himself to get caught up in the verbal melee, most of the responsibility lands directly in the lap of the Idiot Jerk in the White House.  This was a make or break event for his campaign and so he chose to be as belligerent as possible.  He interrupted Biden 73 times, according to CBS.  Many are blaming moderator Chris Wallace for not maintaining control.  Personally, I don't think there was anything he could have done other than mute the Idiot Jerk's microphone.  Maybe we should just chalk this up as a learning experience.  Next time, if there is a next time, kill the mikes.
Who won?  Across the board most are saying Biden simply because he didn't succumb to the attacks by the Idiot Jerk.  Quite satisfying to most Democrats, were those times when he called the Idiot Jerk a 'liar,' a 'clown,' and a 'failure.'  He even told him to 'shut up.,' not that the tinfoil dictator listened.  Who lost?  By most counts the American people because one of the candidates tried to forge his own, new rules about debating.  This man shoveled more lies and shit in 90 minutes than most sewage systems can handle.  Oh, and he refused to denounce white supremacy... and that's making big headlines.
Most important, Conservative pundits are admitting he failed to do that thing which was most important to him... jumpstart his failing campaign.  Oh, and when I say most I'm not including the Idiot Jerk's propaganda machine known as Fox News.  Evidently Sean Hannity love the interruptions, said the Idiot Jerk was steamrolling Biden.  Foolish Sean.  He doesn't realize that after the Idiot Jerk loses on November 3, his ass is going to be steamrolled right into court.