After yesterday, I only have 5 consecutive work days left until my weekend begins.  Rats!

On the brighter side of work, we're celebrating our Succession Sharing at the big orange retailer I work for, that's when associates working for at least 6 months prior to then end of the half year (3rd fiscal week in July) get bonus checks.  The $$$ you get depends upon your rate of pay, total years employed, and total hours worked during that time frame.  We did very, very well during this pandemic.  Even part-time associates are getting nice check. And on top of that, they feed us, too.

Last week, up in Luzerne County, some moron opened 9 military ballots that had been mailed in and then, because that person invalidated them, they were thrown in the trash. Seven of them were for the Idiot Jerk in the white House.  Luzerne County is overwhelmingly Republican... so they're making a big stink.  Don't worry, they'll end up blaming Clinton.

The Idiot Jerk went to supposedly pay his  last respects to RBG and was met with protestors who chanted "Lock him up!"  Can we talk about Karma here?  While his MAGA head supporters may have chanted that at his rallies about Clinton, there was no way that could happen because she'd done nothing wrong.  With the Idiot Jerk?  That's one of the main reason he'll head to Russia after the transfer of power.

I ended up putting overtime yesterday because our scheduler doesn't understand the meaning of 'coverage.'  Because I had to stay late, I didn't get to ride the bike.  I understand they've hired someone to replace the Specialist who moved to North Carolina.  I don't know when he's starting, but it can't be soon enough.

And finally, I got together with Cori about the cover art for The Body in the Loch yesterday.  I had thought of some sort of watery theme since the body is discovered floating in Loch Adair.  And then last week, while sitting at my desk checking the headlines on my phone, an idea picture suddenly blossomed in my brain.  I grabbed a piece of printing paper and did a little sketch.  When she saw it, she nodded, and then asked if she could add a personal touch.  Sure, I exclaimed, realizing how nifty it was going to look.  And since I like dropping little hints, here's a bit of concept art for a small section of the cover.  Nifty, huh? 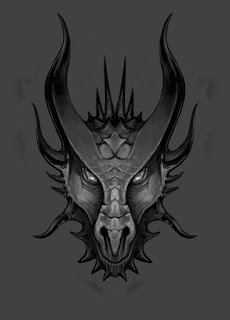 Email ThisBlogThis!Share to TwitterShare to FacebookShare to Pinterest
Labels: Dragon, Luzerne, MAGA, Success Sharing, The Body in the Loch