Day #2 in my long weekend has arrived.  Forecast?  nice temps and low humidity.  I'm planning on painting the old / new backdoor.  I primed it yesterday so it's ready to go.

And I did make Kung Pao chicken for dinner.  Here's a pic of it on a bed or rice.  Yes, there are also red and green peppers as well as some chili peppers.  In some recipes the only veggies are the chilis.  Can we talk tasty here?  Oh, and I don't sliver my green onions. 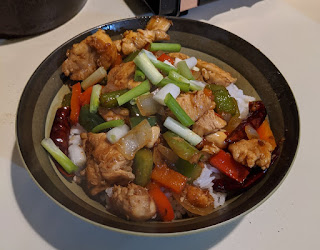 I see where the Idiot Jerk in the White House had an indoor rally in Nevada.  If you're a Democrat or an Independent voter who knows anyone who attended, take some serious precautions.  Republicans don't believe Covid is serious.  The deaths don't phase them, most likely because minorities and seniors are those hardest hit.  I watched about 15 seconds with the volume turned down. Can we talk about a sea of white people who don't believe in science?  Nope, there isn't one iota of a common sense idea among them.  Stupidity is embraced.
And another song has joined the list for inclusion in The Body in the Loch.  In case you're wondering, I don't have this long playlist in my head.  Now and then I will hear a song, and think about the lyric.  Sometimes in surprising places.  They keep playing this one at work, part of their oldies playlist.  It is a classic.  Now you're going to have to figure out how it plays into the story.

Email ThisBlogThis!Share to TwitterShare to FacebookShare to Pinterest
Labels: Donald Trump, Kung Pao Chicken, Nevada, The Body in the Loch