Halfway through my 6 day work week.  They happen every now and then, but back to back is not in my normal game plan.  Only 2 more week to go until I my schedule changes.  I don't mean to decry my 8 - 4:30 shift, it's something so many desperately want, but when you're a morning person that 0800 start time come way too fast.

Yesterday was Italian food day at work.  I had the Chicken Parmigiana, it was... okay.  There was a lot of mozzarella, a lot of breading... and a little chicken.  I prefer more meat and less filler.  At least the bits of chicken were real and not process, a problem if you happen to buy one of the frozen Stouffer entrées.  Anyway, I did get the chance to dress up as Captain America. 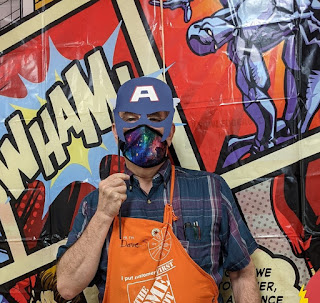 Notice, I didn't comment on how much I resemble Chris Evans.
As expected, the Idiot Jerk nominated a Cracker Jack Crazy christian to the Supreme Court, a move which is intended to get the Cracker Jacks to the polls... Duh.  Someone should have told him they have already committed their souls to him.  Oh course, he's believes the Reagan lie, that there's a silent majority of conservatives out there.  As I've said before, Reagan started the lie, the Idiot Jerk in the White House is going to end it.  Permanently.
And there's a debate coming up on Tuesday.  I never watch them.  Don't like them.  You see, the candidates don't really debate.  What you get are slow, ponderous responses to questions geared around generalities.  Debates prove nothing since no candidate fulfills everything he promises.  They have become nothing more than a verbal blood sport.
And while I don't watch them, I will be interested in Wednesday morning's opinions this year.  You see, the Idiot Jerk is continually challenging Biden's acuity, even as his aides are working on the sidelines tampering down expectations.  You see, all the Idiot Jerk has are the same old lies, innuendo, and conspiracy theories which will make his base dance and sing.  America will listen to Joe.