Yesterday I was a Slouch

That's right.  It was my day off.  I had a lot of things planned: riding the bike, cleaning, doing laundry.  However, after I finished writing my blog I went to my local Giant to pick up few necessities... and ended up buy Chinese Food.  I love Chinese Food, especially their noodle dishes.  Forty some years ago the US Navy flew me to the Western Pacific, having decided to station me on board the USS Constellation.  My first port of call, after that long, long flight, was in Hong Kong.  And the first thing my friends and I did when we got ashore was go to a Chinese restaurant.  What we have in this country is American Chinese cooking, nothing at all like what they served up in Hong Kong.  This is why I learned to cook Chinese, and why I go to Chinese supermarkets.
Anyway, yesterday I hit my local Giant where they have a Chinese take-out and ended up buying about 5 pounds of Lo Mein... well, not really that much, but you get the idea.  So yesterday, instead of accomplishing quite a lot, I ended up nibbling the day through a lot of Lo Mein.  I did get 3 loads of laundry done.  That's right.  No cycling.  No weight training.  I was a slouch. 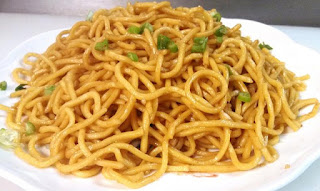 I did see that the clueless Republicans managed to get Betsy de Vos approved.  That's a mistake.  Evangelicals are a giddy because no they believe the Federal Government is going to give them vouchers to send their kids to Krazy Kristian schools.  That's all they care about.  The fact that those Krazy Kristian Schools are just as bad, have just as many problems are regular schools doesn't occur to them.  They don't care if their kids are still doing drugs, or drinking, or girls are getting pregnant, at least their doing it in a Christian environment.  Idiots.