CPAC is happening right now, that gathering of Crazy Conservatives.  This year there many Republican Congressmen are no shows, the excuse being it's a bad time of year and... get this, they managed to get a Conservative into the White House.  I suspect the real reason is because of the uproar at Town Halls.  Speakers at the convention are saying it is not something to worry about, but it is, and I suspect they are more than slightly concerned.  You see for years, ever since Reagan, Conservatives have been bragging about a Moral Majority, or sometimes they called it a Silent Majority, and those really crazy ones called it a Christian Majority, because they believed there were millions and millions of Americans who loved what they were doing.
In a twisted way, they were partially correct, there is a Silent Majority, however that group is not made up of Conservatives, rather the members of that group are Independents, and Centrist Republicans, as well as those on the Left, and we are the Majority.  And, of course, they are in total denial since the truth scares them shitless.  They are the Major Minority.


We are the Silent Majority 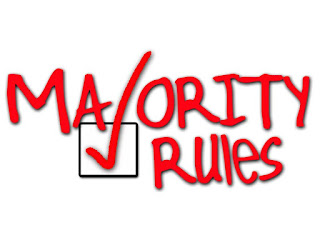