Bruce / the Press / Sunday in the Park

A couple of notes before I go to work:
How about that terse letter Bruce Jenner sent to DT (you know, I'll always call him Bruce until he has the surgery)?  Nasty, eh?  Well, not quite.  But then, what more could you expect from a Box of Rocks, as my friend Jack likes to call him.  He needs to take some sort of primary course in order to understand what Conservatives really think of him... and his... shall we say problems.  I suspect that in his thimble sized mind he might have believed he would change minds.  As I said, dumb as a box of rocks.
Neither DT, nor the GOP, nor the dictator in training, Steve Bannon, like the press.  If they had their druthers they'd just shut down everything that didn't kiss the ass of DT.  Unfortunately for them, this is America, and they are a minority, and even the fact that the excluded members of the press from that Silly Spicer's gaggle... well that pissed people off.  Someone should tell them that if they want people to get on their side, to give DT a chance, they've got to stop looking at the majority and saying "Bend Over Buddy."
And on the lighter side, the NYT gave "Sunday in the Park with George" a big thumbs up.  I like this.  You see back in '84 I went to see this show.  I loved it.  And, of course, I bought a program. 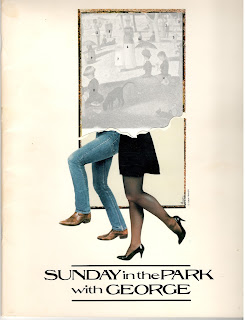 When I went to see it, Mandy Patinkin had just left, but Bernadette was still staring.  That's right, sitting in the 18th row, I got to watch and hear Bernadette Peters singing Sondheim.  Simply Amazing!

Email ThisBlogThis!Share to TwitterShare to FacebookShare to Pinterest
Labels: Bannon, GOP, Jenner, Sunday in the Park with George, Trump