It's been a hectic past month and a half.  We moved my 82 year old mother into a Senior Living Facility after she developed some health issues (she hates it) and we're selling her home (closing is 1/18/16).  Anyway, I needed to post some observations.

Firstly:  There's evidently some kind of Bromance going on between Vladimir Putin and Donald Trump since they've both started admiring each other.  Bet the Trumplodites into near earth orbit, you know, having the Ruskie and their little demagogue bonding in such a dictatorial way.

Secondly:  There is the Smelly Shkreli story.  For those who don't know, he got busted this past week, and the judge was wise enough to take away his passport... hhmm.  Wouldn't you think a Social Psychopath like Marty Shkreli my have a phony second passport, maybe even a third.  My suspicion is that in the next few weeks he will... disappear.  Isn't that what scumbags like him do?

Then there's the Barbara Walters Top 10 list... who gives a shit?  She should have retired on her laurels years ago rather then failing so obviously to remain relevant.

And then we're back to the passport thing, though not with Smelly Shkreli, this time we're dealing with Ethan Couch.  You do remember him, don't you?  The 16 year old drunkard who killed 4 when he lost control of the vehicle he was driving?  Anyway, Judge Boyd, (now retired) sentenced this losing sack of shit 10 years probation. 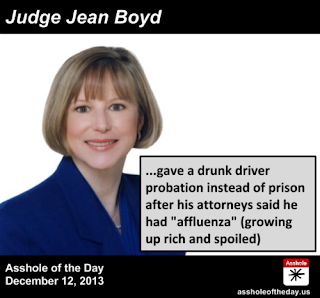 Why, because his dysfunctional parents failed to raise a human being most because they're just bottom feeding breeders.  Anyway, Texas authorities now believe that Ethan and his sow of a mother have split the country.  That's right, they are on the lam.  Not yet International Fugitives, but I suspect that's the target their aiming for. Now I'll be honest, way back when Judge Jean Boyd demonstrated utter incompetence in sentencing Ethan Couch to 10 years of probation I said to myself, "hey, that piece of shit is going to split," and... surprise!  Anyway, I suppose Judge Jean Boyd is not sleeping easier because now, at least, she knows he's no longer driving drunk in Texas.