Yesterday something terrible happened in San Bernardino, 14 people were murdered by pseudo terrorists, one of them born and raised in the good old USA.  Oh, and these two killers bought their guns legally.  Not surprisingly, all those Republican wanna be presidents all sent a lot of "thoughts and prayers" to the victims.  Of course, they couldn't really do anything else, could they?  The NRA sends them lots of legal donations to keep silent.  Mum's the word every time there's a mass murder.  No outrage, no sign of anger what so ever, just bowed heads diligently praying that all those Ammosexuals out there will continue to fill the Republican coffers.  Innocent people get mowed down by bullets and the Republican reaction is always the same.  True, they do wear their dismal little frowns and shake their heads silently, but there's no real empathy ever put on display.  Were they to do that, perchance, some of their gun totting base might not vote, they might stay home because their representatives seem to have gone a little soft on guns.  And every vote counts. 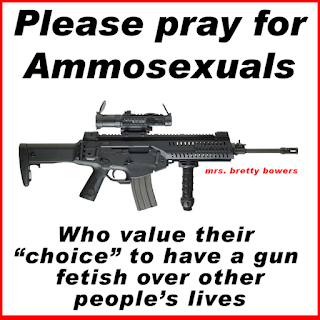 Now you might think that because they are so muted by mass murders they are not be a very excitable breed, these Republican Presidential wanna be's, but that's not true at all.  Drop the word Benghazi into the conversation and see just how violently they react.  If only they could channel just a teeny, weensy bit of that rage, and demonstrate just a modicum of concern over this multitude of mass murders, well, they might just surprise you by saying "this is not normal".... oh, wait, that was Hillary, wasn't it?