While Trump continues to revel in his negativity for all who aren't his supporters, most of whom are older, less educated, and financially less secure (if you don't believe me Google it), the rest of us have done a big jump-back as we try to fathom how the GOP could be manhandled in such a way by this neo-fascist.  It all goes back to Ronald Reagan's landslide re-election.  Having survived an assassination attempt, Reagan saw his approval rating sky rocket to the high 90's, peaking out at 97% and confused Republicans thought this meant the country, far and wide, had suddenly gone conservative.  It didn't.  People just liked the old fart.  He was very grandfatherly.  His second term in office was a mess.  This is why he's considered an average president. 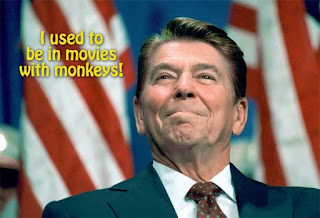 George H. Bush's presidency was marred terribly by a vomiting session at a Japanese state dinner and by the fact that, following the map set out by Reaganomics, the economy started drying up.  And the GOP began to hate everybody who didn't agree with them.  When Clinton won with the campaign slogan "It's the economy, stupid," the hate went into over drive.  It was impossible for them to believe everything they held sacred was false.  They've been hating ever since.
Instead of understanding they needed to comprise after getting George W. into the White House by the skin of their teeth, they said "screw you America, your popular vote means nothing, we are in charge so shut up."  And they continued to regionalize themselves, and marginalize themselves as a party.  They used terror tactics to get W a second term and we ended up with the 2nd worst economic disaster in American history.
When Obama was elected for his first term their hate and negativity rose to a fever pitch, and at his second win of the White House they became frenzied.
Now they're facing the very real possibility of having a Democrat in the White House for a 3rd consecutive term and they're reeling back and forth.  Their front runner has alienated so many groups of voters, voters they need to get into the White House, and he doesn't care since all he's really doing is masturbating his own ego.  And they're wondering how they could have ended up in such a shit hole.  What the GOP really needs to do is put the blame where it belongs, on Ronald Reagan's head because his re-election was a lie.