I began the new year by working.  There were a number of customers until around 2 (PM), and then the thinning began.  An hour later our aisles were fairly empty.  In the morning, however, we had a number of customers.  Honestly, I wasn't surprised that much.  We just ended a year in which many might have considered a bad case of the runs just another day in a really shitty year, so for them, yesterday was just another day.

On Monday, in Pennsylvania, they're supposed to be lifting restrictions.  If that happens, I've plans to go to the movies on January 8th to see the new Wonder Woman movie.  I understand it's entertaining.

Being the new year, I decided to adjust my workout mileage.  Last year I set my goat at 2500 and ended up doing 2130.  I adjusted my cycling to 2250 and added 200 for running.  The idea is to challenge myself, but not set an unreachable goal.  The difficult part will be over the next eight or nine weeks since they are what I consider the 'quiet' months, when I will have to work hard to keep from entering the hibernation zone.

One change I did do recently was to start using honey as a sweetener in my morning oatmeal rather than brown sugar.  Taking things a step further, I decided to use honeycomb, rather than the processed honey you buy in bottles.  I was surprised by how much sweeter it was. 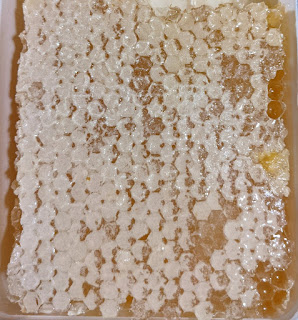 It does take a little longer to cook my oatmeal, but boy is my breakfast tastier.
I saw Biden's message was uplifting, talking about the challenges facing our country, including vaccine distribution which is another thing our outgoing sack of shit screwed up.  And, speaking of that loser, he released a video on Twitter in which he bragged about his failed accomplishments.  Quite a number of people on social media pointed out that this asswipe talked only about the past... not one syllable about the future.  This might be the closest thing we get to a concession speech.