Every now and then I like to read blogs so I can get an idea as to what all those voices out there on the Internet are saying.  Sometimes they're political but not always.  I have a great interest in health and well being, especially now that I'm passing through the prime years of my middle age.  Last evening I stumbled upon the writings of some poor gent who, to be blunt, had a problem with older people whom he described as "fat and grey."  He also claimed to be 46, which puts him on the precipice of falling into that age group.  If he doesn't think so, he should ask a 25 year old.  He also needs to understand the older some people get the lazier they become, hence the weight gain.  As for turning gray, unless you're a woman there's little you can do.  Oh, sure, there is this, but there are a number of problems. 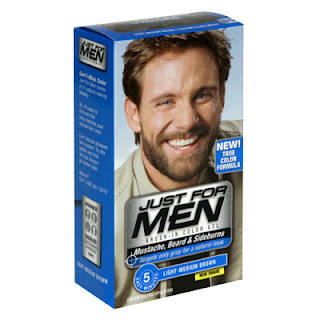 But it only comes in five colors and you adjust the shade by timing how long it's on your beard, mustache, or sideburns.  How do I know?  I tried it.  So, even thought the box above states the color is "light - medium brown,"  wait too long to wash it off and it's dark brown.  Oh, and the color is exactly that, dark brown, there is no shading.  I suspect that for most men who try it, the result is usually darker then they expected since you can't tell how dark it is when it's gooing up your mustache, beard or sideburns.  For me the end result was something which looked nearly as artificial as the mustache on Groucho Marx. 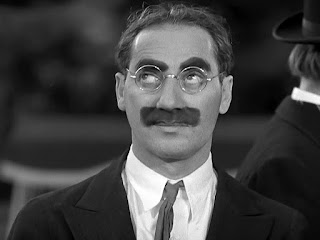 He put his on with grease paint.  Just For Men dyes, or colors, the skin beneath your mustache, sideburns or beard too.  I suppose it's just part of the process.  Anyway, I thought it looked faked as hell.  It was so not me.  While I have some salt and pepper on my temples, most of the hair on my head is very dark brown.  There was no match.  My mustache looked like it belonged to somebody else.  After trying it twice, I threw it away.  Thank goodness it was only the hair roofing my upper lip I was concerned about.  Have you ever seen the guys who use this shit on their head?  They might just as well buy a can of black, or brown spray paint since it does the same job.  As for the guy who whined about older people?  I think his real problem is his own aging process.  I wouldn't be surprised if he is one of those people who is already on his way to being fat and gray.
Posted by Dave R at 7:00 AM