Blinded by the Right

So, it looks like the honeymoon is over.  How do I know?  The GOP is beginning to dig their heels in becoming, once again, the most divisive political party in American History.  They don't understand that when you lose an election you need to learn to compromise.  Instead they seem cluelessly intent on catering to a shrinking base without even considering how bad this looks to the majority.  You don't win people over to your side by handing them what they know to be a plate of shit.  For example, take John McCain.  After losing his bid for the presidency, he should have sat out that last term as a senator and retired.  He would have earned so much respect traveling the country and become "the dignified hero."  When you chose a seriously flawed vice presidential candidate, and lose a seriously flawed campaign, you need to quietly step out of the limelight.  He must have slept through that lesson in school.  Now, he has basically become the unruly guest who will not leave the party. 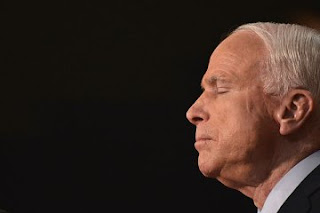 Sadly, his only appeal seems to be to the right wing crazies who helped Mitt Romney lose his bid for the presidency.  I understand this January, McCain will no longer head up any committee and will be relegated to, if at best, a secondary position.  He is in his decendency and hates it.  As a result he will dig in his heels and say, and do, what ever it takes to get his name in the press.  Translate this into "he will not compromise."  This is exactly what the GOP is beginning to do because they also are in their decendency.  After the election there was all of this chit-chat bullshit about how they would need to re-evaluate, how they would have to compromise in order to broaden their appeal.  Of course, we all know that is never going to happen.  For this to occur they would need to admit they were wrong, that their political drift to the far right does not appeal to the majority of Americans.  I suspect they will continue to be an obstructionist party until they split themselves asunder.  Even then they will cry out and try and blame someone else.
Posted by Dave R at 2:03 PM