The Body Under Ice

I was down in York yesterday for lunch with my friend Betsy.  One of the gifts I got for my 70th was a $50 gift card to Outback Steakhouse.  While I don't mind a decent steak on occasion, I'm more of a poultry, pork, or seafood kind of guy.  And Outback is okay for a sit down meal of fast food.  If you want fine dining, you go to a restaurant.  I thought the food was overpriced, and their desert menu had 7 items, 2 of which were variations on the ever popular carrot cake.  I ordered a chicken sandwich which came with one slice of swiss cheese and one strip of bacon, I know, I looked under the bun.  I will admit, however, that for a free meal it was quite tasty.

Otherwise, yesterday was quiet.  When I got home, I finished the last chapter of The Body Under Ice.  78,000 words, right now.  That will increase as I start to polish the manuscript.  As you can see, I have lots of notes.  Are there any secrets in the post-it notes?  Hhhmm, I don't think so. 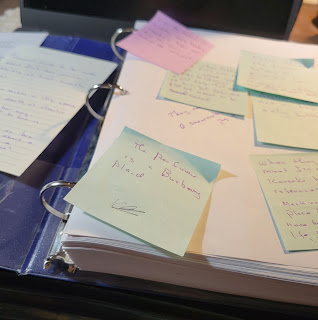 I don't know if anybody else saw it, but Michael Steele, who used to be the head of the RNC, said publicly that he hopes Trump is in jail by the time the 2024 election rolls around.  That made me laugh.  There is a small segment of Republicans who understand the amount of damage the Orange Anus is doing to the party.  Honestly, if I were one of those Republicans, I'd want him in jail by next week so the public furor has a chance to die down.  Well, that ain't gonna happen.  He's going to be indicted maybe 2, 3 or 4 times, and then we're going to have to wait for the trial (s), and all that time he's going to be taking a baseball bat to the Republican base.  He will stretch this out until there are no Republicans left standing.
Marjorie Taylor dumbass has said that had she and Steven Bannon been running the January 6 riot, they would have succeeded.  Every time this stupid woman opens her mouth she dumbs down the GOP even more.
Finally, Elon the Stupid tweeted some shit about how his intervention in Twitter is going to save civilization.  He evidently doesn't realize that  the number of people on Twitter is small, being dwarfed by the number of people on Facebook.  He doesn't understand that quite a few of those people on Twitter aren't really people, just bots who will never be paying for a subscription.  There's a good possibility he will not even be able to save his own ass, let alone civilization.  He does put the shit in dumb shit.