Santa's on his way

Good Morning!  Biggie's at the Vet.  I was telling everybody his appointment was for Wednesday - well, I was wrong.  This is why I put everything in my calendar.  Sometimes things stick in our minds of which we are so very certain and turn out to be incorrect.  Why did Wednesday stick in my head?  Was I thinking of the Netflix series (which is pretty good), or was the first date the Vet suggested Wednesday, tomorrow?  I'm thinking that's probably the case.  Of course, there I go thinking again.
Work was very slow yesterday.  We're down in measures and sales.  Seriously, when I look at sales for the district, the numbers are almost spot on with our sales pre-pandemic.  That's a reality many corporations don't want to deal with.
The garbage men took my old garbage can.  I had just gotten home from dropping Biggie off, when they drove my my house.  No problem.  It was very old.  The bottom had large holes in it.  One of the wheels had fallen off so it no longer rolled.  I got my money's worth out of that purchase, since it survived over 14 years.
There's big storm a brewing!  It's supposed to begin on Thursday in the Midwest and move east.  This little map looks bad.  According to this I should hit the liquor store prior to getting screwed.  Accuweather says we're going to be getting mixed precipitation on Thursday, snow to rain on Friday, and then the temperature is predicted to crash on Christmas eve, with the high only reaching up into the mid 20s (F).  I think I'll play it safe and pick up a bottle of wine. 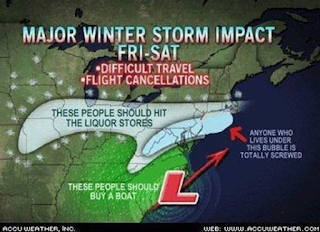 For those who don't Tweet:  Elon lost his poll and decided to change the rules.  If you want to vote in one of his Twitter polls now, you need to purchase and $8 monthly subscription.  Some will pay, I will not.  I'm on Post, signing up for Mastodon, and already on Tribal.  Of the 3, I suspect Post will become the most popular, except for MAGA bots.
And, of course the celebrating has just begun.  As everyone knows by now, the January 6 committee has recommended the DOJ indict the Orange Anus on 4 different charges.  The BBC has a nice take on the matter, but then so does everyone else.  It will be interesting to see how the effect the Republican party, especially in the House of Representatives where the American Freedom Caucus worships the shit beneath his feet.  Social Conservatives who believed they were going to declare holy war on America are now embattled in war with each other.  And as for the Evangelicals, their holy grail has sprung a leak.  What will the DOJ do?  Indictments will follow more rapid than eagles, and as leaves that before the wild hurricane fly when they meet with an obstacle, mount to the sky. Santa's on his way.
Posted by Dave R at 9:41 AM