Short entry today because I have a dental appointment in an hour.  There's some leakage around a back filling making it sensitive to cold and hot... mostly cold.

Speaking of cold, the temp outside is a cold 24 (F).  Things are frozen.  Tomorrow we're supposed to get a combo of sleet and snow, maybe up to 3 inches.  If it's crappy when I get up, I might call off work.  Though, since I'm not scheduled until 1 PM, the roads will most likely be fine.

Here's a pic of the new laundry room with the bar cart in place.  You'll notice it's on wheels.  I'm still going to be using the shelves for storage.  I'm going to be getting an area rug for in front of the washer / dryer.  That vinyl floor may look nice, but static electricity makes it a dust magnet.  I'm always wiping it up. 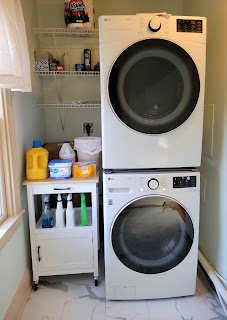 And, what about all those texts coming out?  The ones from Republicans to Mark Meadows telling him Trump should declare martial law in order for them to stay in power.  THIRTY FOUR  of them.  An indicator as to how stupid some of them are, is the fact that some of them didn't know the difference between martial and marshall, the latter not only being misspelled, but the wrong word.  These people are so craven for power they would have no problem destroying the United States.  These congressmen are still in the House and Senate, though mostly in the House, I believe.
The problem in America is that we have been far to politically benevolent.  Punishment for crimes is supposed to teach lessons, more often then not, our presidents have doled out pardons to offenders and always for political reasons.  Ollie North should still be sitting in jail.
The problem is that our newspapers and cable news networks try to be politically correct, softening the truth about lies, calling them falsehoods.  Being kinder and gentler when it comes to dealing with sedition is never going to work.