From the Teat of Republican Hatred

Thursday.  Outside the temp is 31 (F) and we have freezing rain.  Supposedly, this is not going to amount to much.  A glaze, perhaps.  Looking out onto the veranda, there's a lot of shine, but it seems more wet than slick.  I'm not about to go out to see how slippery things are.  I am scheduled to work today.  If around10 ish the roads seem slick, I'll take a personal day.

I went to the dentist yesterday morning to have a filling replace; it was old and had started to leak around the edge making the tooth sensitive to hot and cold.  Well, that's fixed now, however, he wants to put a crown on the tooth.  Well, that's not going to happen.  He didn't like the fact that I'm switching to Blue Cross dental insurance, "they don't pay so we dropped them," he said, "and I'd hate to see you go to another dentist."  Maybe if he didn't charge so much that people need to rely on insurance, there might be no problem.  A really bad fiscal policy is to charge as much as insurance companies will pay.

I found this nifty! The sound of a wind devil on Mars.  This is what it looked like.  Someday we will be walking on this planet. 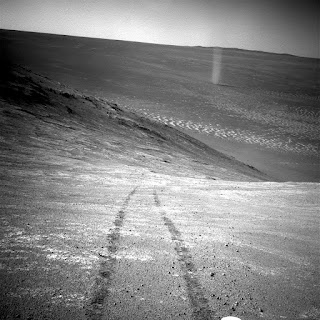 The Orange Anus is going to make some sort of big announcement today.  There notified the world of this big announcement with an animated video:  him ripping open his shirt to reveal large T (like Superman) while lasers shot out of his eyes.  I'm not posting it.  Very amateurish, possibly hoping to suck Marvel fans into the MAGA cult, some think he's going to announce that Kari Lake is his running mate.  Others believe he might be announcing his intention to run for Speaker of the House.  Still, others think he's going to re-announce his candidacy, since the first announcement floated like a turd in a public swimming pool.  Or, perhaps, he just needs a boost to his ego since recent polls shown DeSantis leading him among the Cracker Jack Crazies.
And then there's this:  Deep controversies in the Republican party are causing serious rifts.  Usually, after a stunning defeat in the midterms, a political party re-evaluates their positions, they pinpoint mistakes which need to be corrected, they understand the need for softening their rhetoric in order to appeal to more centrist voters.  This is not so for a majority of Republicans in the House.  Instead, they are gathering as many dead horses around them as possible:  Hunter Biden's laptop, Fauci's wisdom, disagreeable election results, and they are going to continue kicking them as hard as they can.  For them, this is survival mode; hold onto the base by giving them what they want.  Expect nothing less from the party which has suckled supporters on the teat of Republican hatred for years.  After Trump is indicted, these same people will be desperately searching among the ruins for survivors.