We've got a sunny Friday outside.  Again, the temps are forecast to rise into the low 50s (F), which is not bad for this time of the year.  Predictions are that we're supposed to stay this warm until the middle of next week, then temps just might drop.  That's okay.

I talked to the Vet last night about Biggie.  I nixed the idea of doing an ultra-sound on his belly.  There is only a 15% chance this little tumor he has is located on his adrenal glands.  Instead, I'm opting for the low-dose dexamethasone test, which has good results at locating the location.  Two days after the bloodwork is completed, he should be on meds.

Cori, my cover artist, informed me yesterday that the cover for The Body Under Ice should be ready next week.  I'm finishing up the last chapter.  Then there will be a revision; I have notes on some changes that need to be done before it goes through the editor.  As in the past, I'll be looking for 2 blog readers who want to provide input before the final draft gets published.  As payment, these readers get an autographed paperback copy. They are on a schedule though, meaning it's not something you can take your time to leisurely read through.  Interested people should contact me through the email address I have listed in my profile.

And now, about this self-serving Bitch. 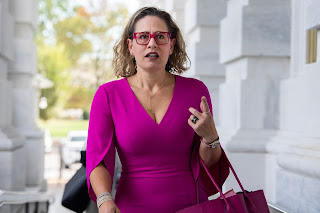 She changed her party designation to Independent.  Honestly, when I saw that this morning I wasn't surprised in the least bit, however, I did blurt out two words: that Bitch.  Comments I've seen in the Washington Post, and the NYT have almost all focused on the fact that she's always been self-serving, prioritizing her own need for attention over everything else.  She doesn't give press conferences, doesn't openly seek the limelight, but everyone is always talking about her.  The minute Warnock won, she became irrelevant.  She could be ignored.  No one was ever going to be wondering what Sinema was going to do, or if she was going to vote with her party, never again.  She would be just another Democrat.  So, what does this self-serving Bitch do?  She changes party.  Sorry, but congressman who change parties halfway through their terms are always asswipes.  By getting elected, Sinema made a commitment to the people of Arizona who gave her their votes that she was going to represent them.  Now, she's done something worse than simply ignoring those voters, she has dismissed their importance with a simple 'fuck you.'  And it puts her in the spotlight.  Paraphrasing Steven Beschloss, she has put herself on a whole new level of attention whore.  Some are saying she changed to Independent in an attempt to save her political career.  What career?