Under-performance by and Idiot Jerk

Well, it's Sunday and I get to go to work.  In just a few hours I will find out if I'm going to be wearing a mask.  I have one hear at the house, but I'm saving it for special occasions, like when I go to the supermarket.  I don't have any snazzy handkerchiefs I can turn into face masks.  If I get really desperate I can pull an old T-shirt up over my nose.
Yesterday I mowed my front lawn for the first time this year.  It needed it.  My mower's battery powered so there was no need to go fill up the gas can.
I also baked bread, again. 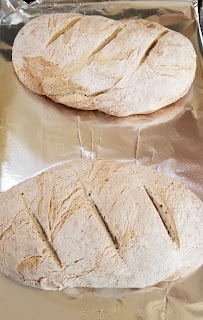 And it is out of reach of doggy paws.
Of course, you've have to be in a coma to not understand the reason the Idiot Jerk in the White House uses his daily updates as a campaign platform.  Normally, this would lead to a surge in his approval ratings.  Remember George W after 9/11?  His approval went through the roof.  I knew, when I saw him standing on the ruins of the Twin Towers there was no way he wasn't going to get re-elected.  That was W's presidential moment.  That hasn't happened for the Idiot Jerk in the White House.  People tune in to his briefings for 2 reasons:  Birx and Fauci, the only 2 people on that stage who don't lie.  Who is it that people are paying attention to?  Governors and Mayors across the country who give daily updates have approval ratings that are soaring. Those who side with the administration are not doing nearly as well.  The governors of Florida and Georgia?  Not so good.  And not so for the Idiot Jerk in the White House.  He got an itty bitty bump.  That's it.  And that little bump is already fading away.
And the Washington Post had this really snarky piece on Jared Kushner.  This guy should be flipping burgers at some seedy, greasy spoon, not standing at the podium in the press briefing room.  After the next election, I'm certain he will self-quarantine on some little island where he can grow grapes and raise chickens.
And finally, the last song whose lyrics made it into "The Body in the Well," is little gem by Dan Fogelberg.  This is the extended version, not the one on the album.

Rock and Roll, you know.