My weekend begins today!  I had set the alarm for 0500 planning on starting my chores early, however when the dulcet tones of Bixby roused me from my slumber I said "hell," turned her off and went back to bed for another 2 hours.
Yesterday was better than most at work.  I only had one customer, an older middle-aged man who was asking questions about hard wood flooring.  He was unhappy with my response:  "no we don't have 600 square feet of that in stock."  He shook his head in irritation "well, that's not good."  I wasn't sorry in the least.  There are much better times to go looking for hard wood flooring then during a pandemic.  I didn't tell him that since it wouldn't have made any sense to him.
We had a full moon 2 days ago, and while I looked at it, I never thought to take a picture.  Last evening, as I was letting the dogs out (yes! it was I who left the dogs out!) I decided to grab my phone and take one.  I don't know what's more interesting, the moon, or the shadow of my river birch on my neighbor's garage. 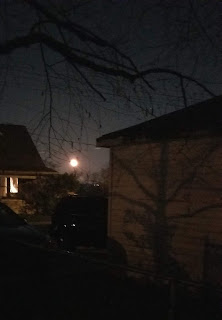 And for those of you who didn't know, Bernie's out of the race.  This is not what the Republicans wanted.  They had been praying for him to stay in until the convention.  Their prayers have not been answered.  They had been praying for he and Biden to shred each publicly.  Son of a bitch!  Those prayers have not been answered.  In fact, just the opposite is happening.  Democrats, the majority party, are beginning to unite.  This is called building a wave.  They prayed this was not going to happen.  Shit, that's another unanswered prayer.  They will see this as evil, as anything else goes contrary to their deepest belief.... that they are special.  In a way they are... and we're going to put them into their special little place.
As for the Idiot Jerk in the White House?  Prepare yourselves.  His lies will spread a stink across the land.  And his white Evangelical base?  They will swallow and regurgitate every false word that seeps from his face crack.  In case you have realized it, by now they are now in a symbiotic relationship with each other,  They feed off each other.  Remove once source of their dependency and their mutualism will die.  The easiest way to do that is vote that bastard out of office.