I slept in today... well, that's not entirely true.  I did get up.  I did a few chores.  After they were done I laid back down.  This is my day off.  I think I'm going to back banana walnut bread later on.
Yesterday I worked my full 8 hours shift.  I followed the schedule.  As I was leaving, the store manager asked if I had changed back to my regular shift.  I told him "no," that I was only working what I had been scheduled.  Evidently my schedule for this week hadn't been changed.  That has been remedied.  I don't mind working as long as I don't have to deal with stupid people.
My nephew's not too bright wife posted some silly thing on Facebook.  She said she couldn't understand why people working at grocery stores should be treated like heroes and given metals.  Of course, I had to ask her what kind of metal she was talking about.  Copper or tin?  Like I said, not too bright.
I understand the Idiot Jerk in the White House had some sort of "unhinged" pandemic update yesterday.  That's what The Guardian called it.  Everybody else called it pure propaganda.  Since I don't have cable, I didn't watch it.  My friend Betsy said it was horrible.  Evidently it was a real Shit Show and pretty much everybody is calling exactly that... a shit show.  I really do think he should do the American Public a favor and fire Fauci, that way his ratings would plummet and the networks would cancel his absurd reality show.   The American Public is going to fire him this fall, so maybe he should start getting used to it.
The Idiot Jerk also implied he had Supreme Authority to open the country when he wanted.  Many Republican and Democratic governors are telling him he needs to flush that hoodoo down the toilet and stop playing with it.  Right now there are 2 coalitions forming:  one on the West Coast and one in the North East.  Both groups are telling him to shut up.  Not that he's going to listen.  White Evangelicals, so craven for power, have been consistently telling him he is a Gift from God.  Unfortunately for them, he believes in his own glory.  Because of that, there is going to be an even bigger Shit Show as both he, and they, ravenously cannibalize themselves as they self-implode. 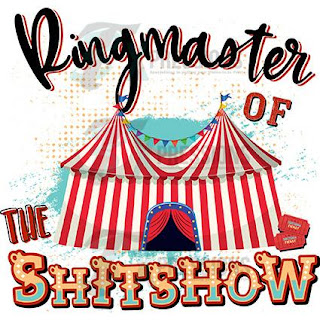 And then, of course, they're going to do what Conservatives have always done, point fingers at everybody but themselves.