Well, it's Thursday and I go back to work.  I checked yesterday and my schedule has been adjusted all the way to May 10, no more than 5 hours a day.  This is fine with me.
I ordered one of these seamless face-mask / bandannas since I have a feeling they're going to become very stylish and necessary in the future.  Mine has a different pattern. 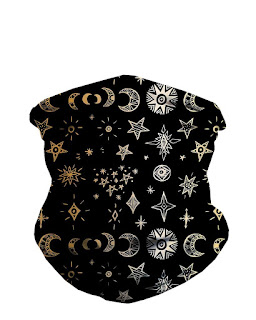 Tres chic, eh?
For those who didn't see, Kellyanne Conway was demonstrating her ignorance on Fox and Friends yesterday.  No one told her the '19' in Covid - 19 comes from the year the virus made its appearance, 2019.  She believes there were 18 previous iterations.  And those boom boom brains on the Idiot Jerk's favorite show nodded sagely, "oh, yes, oh yes," because the segment was focused on attacking the WHO.  Can we talk about fake news here?
Remember Tuesday when the Idiot Jerk demonstrated to the world how unhinged he truly is?  When he took us into his twisted fantasyland where he's been on top of this whole thing from the very beginning?  Despite his trying to rewrite history on that day, something else happened.  Remember that election in Wisconsin?  The one that couldn't be delayed because the Conservatives in our Supreme Court were hoping Democrats were going to go out and vote... and possibly get sick?  Well, that turned out to be a very bad decision for Conservatives.  You see, those Democratic voters were also voting for a brand, new Supreme Court Justice for the state.  The result was a landslide victory for Liberal Democrat.  The Conservative candidate, the one the Idiot Jerk had been pushing, lost badly.  Ouch.  The Liberal beat the Conservative by over 120,000 votes.  Ouchy!  Ouch!  You can bet the Idiot Jerk must have been seething at receiving such a smack in the face.
And finally, there's a mutant in my yard.  That's right.  Yesterday I was taking pics of my flowers when I spied him... her... it.  Something went genetically wrong.  Being different can be... heartbreaking.  I wanted to be sure she... it... he knew I was being supportive, so I gave.... it (?) a name.  Meet Glen. 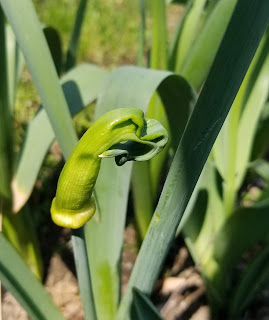 The tulip that couldn't decide if it... he... she wanted to be a flower or a leaf.