The Body in the Well

Okay, so do I want to do the big stuff at the beginning of today's blog?  or at the end?
It snowed like hell yesterday.  I was a counter on the door, no more than 100 in the store at a time, and no one's buying flooring right now.  The Idiot Jerk's fan base thinks it all a joke.  It's all a hoax, you know?  Actually, we have 2 associates out with fever.  How many are actually infected?  We have no idea.  There aren't enough tests for everybody.  You can bet a hot rattler in Pope's Pew there are far more sick people in this country then have been tested.
And Jerry ( the Jr Cracker Jack Crazy Christian) is coming under a lot of fire for opening his university.  More and more people are getting sick.  Trying to defend themselves they ran a full page ad filled with phony information about other universities in the country, how many of them were 'open for business.'  Those universities are call Jerry a liar.  And his students are pissed.  You see, they're losing the big bucks they paid for their room and board... cause they couldn't come back to campus.  I'm betting it would be easier to get a good glass of wine at The Long Branch Saloon then to get a refund from Jerry.
In case you didn't know, the Idiot Jerk caved to the states.  His approval rating has dropped 6 points.  While he may crow over the ratings for his ego fest, most Americans don't watch.  Or they turn him off.  Take testing for example.  We don't have nearly enough for mass testing.  In fact, I do believe we're importing test kits from... South Korea.  And that Hydroxichloroquine?  Don't take it.  It's worse then snake oil.  Talk about the cure being worse than the disease... that stuff will kill you faster than a blunt instrument.
Looks like most of the country is going to have at least another three weeks in which they're going to have to stay at home.  Bored?  Stuck in the house?  Can't go  nowhere?  Maybe now's the time to sit back with a glass of wine and enjoy a little... murder. 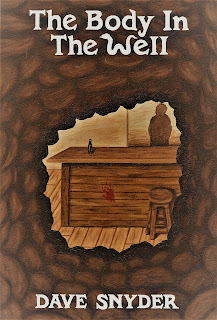 And yes, that is a bloody hand print on the bar.  Now available at Amazon in both Kindle and paperback editions.
Posted by Dave R at 6:10 AM

Email ThisBlogThis!Share to TwitterShare to FacebookShare to Pinterest
Labels: Donald Trump, Jerry Fallwell Jr, The Body in the Well