Wednesday... and I get to go back to work.  For five hours I'll get to enjoy Social Distancing.  My new schedule was posted yesterday and right now I get to go back to full-time hours on May 18.  I do not doubt we will still be wearing some sort of face coverings, probably until there's a vaccine.
A bit about the 'negative' tests:  just because you're not infected today doesn't mean you're not going to get infected tomorrow.  I suspect there are a lot of people out there who don't understand this.  They are like this woman here, who will never get it.

The NYT mentioned Greece again. That country has only had 138 Covid 19 deaths.  Maybe we should all move there, or at least visit.
The Idiot Jerk's administration put out guidelines yesterday for states to follow in regard to opening up.  One of those rules is to have declining infection rates for 14 consecutive days.  No state has reached that yet.  The curve has been flattened in many places, which means hospitals are going to be overwhelmed, but people are still getting sick and dying.  This is something Republicans don't seem to understand, that people are still getting infected.  Of course, their intelligence level is so low many of them consider flattening the curve to mean it's over.  Nope, Granny can still get sick and die.  Don't worry, his base will soon be protesting the wearing of face coverings.
Not surprisingly, his approval ratings have not stabilized.  Nope.  They are experiencing a constantly slow erosion in part, no doubt, because of his need to constantly be in the spotlight.  While his daily briefings may have enthralled his base, the rest of America shook their heads and murmured "Holy Shit."  The never gush of self-praise became more than annoying.  He surrounded himself with scientists and then treated them as though they were "Chatty Cathy" dolls, where every time he pulled a string they spit out a compliment.  All of this has taken a toll on the approval rating of a not too popular president.  And I guess it was the same yesterday, at his non-coronavirus briefing, where he had small business owners come out and compliment and congratulate him on the good job he was doing.  Son of a bitch.
Anyway, I was busy yesterday.  I finally got the wall in my staircase painted.  This is what it looks like now. 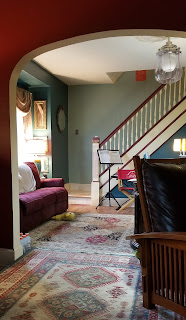 Now I have to figure out what I"m going to do with the banister.