Well, it's Saturday.  Ho... hum.
I do get to go into work again today.  Yesterday I was on the door for most of my 5 hours.  I only had 1.5 assholes to deal with... well maybe 1.75 assholes.  One man in a red coat (no MAGA hat) complained about people being "afraid they're going to get sick," because we're only allowing 100 in the store at a time.  Another man in his early 50's looked at the signs notifying customers that as of Monday everyone needed to wear some for of face mask and shook his head angrily.  And one Asian man said "there's no line at Lowes.  They're letting everybody in the store."  My response.  "Well, then go to Lowes and get infected."  He and his friend stayed in line.  Of the approximately 250 people I dealt with, the vast majority were fine.  Some said "stay safe."  I had some nice conversations with customers and I can tell you, many, many, many are concerned.
If you're like me, you peruse Internet media a lot looking for tidbits that catch your attention.  I found this one interesting a few days back, talking about how the Idiot Jerk in the White House couldn't understand why the US just didn't let the virus 'wash' over us.  And there wasn't just one intance when I saw his 'herd' mentality surfacing.  There were a number of articles from a number of different sources.  I say this because he and his administration are saying there are enough tests to safely send the public  back to work, while many Governors, including Cuomo, are saying just the opposite.  Not testing is how you let 'herd' immunity work.  In case you hadn't realized it, neither he, nor is billionaire cronies, are concerned with how many Americans die as long as they, themselves are safe.  There's going to be a price to pay and they're going to makes sure someone else pays it.
And here's a bit about his ratings.  By now everyone in the country understands he needs to feed his ego... constantly.  Some were stunned when he bragged about his ratings during one of his daily lie sessions.  The fact that he mentioned the Bachelor Finale loudly screamed about where his priorities were.  Just so you know, his highest rating was 12.2 million viewers.  This does not mean they were loving his performance, rather it means 12.2. million Americans had his broadcast turned on.  In actuality, that is only .037% of the American population.  Oh, dear me, that's a problem if you're desperately trying to be popular.
And since we're there, shall we look at approval ratings?  George W's went up to 90% after 9/11 and though the did drop by the time of his re-election they still helped him win a 2nd term in the White House.  The Idiot Jerk's approval ratings shrieked up to a voluminous 54% (now that's screaming, eh?) and have since dropped down to 44%.  Ouch!  Is it any wonder he's angrily Tweeting to his base in Michigan, and Wisconsin, and Virginia.  His re-election is anything but guaranteed.
And Finally, I think we should all send a strong round of Congratulations to Greece, one of the few countries to kick Covid - 19 in the ass.  The EU was was not nearly expecting them to do such a great job.   They were simply amazing. 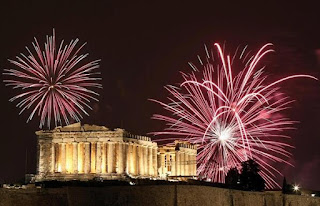 I think everybody should stand and give birthplace of Democracy a rousing round of applause.