Tuesday, and it's another day off for me.  I have a full plate on my agenda for today, including a visit to my neighborhood Giant, and a mowing of the lawn.  I'm going to plant my zinnias today, as well as some bok choy seeds (a first for me).  As for the sweet potato I was growing?  What grew was a vine (about 8 feet long) with single leaves every 6 to 8 inches, rather than a plant, and the vine start breaking off in 2 foot sections after it hit that 8 feet.  It was not at all what I was expecting, so I think I'm going to use it as fertilizer and grow something else in that old coffee pot.
One of the things I did yesterday was cut an old sheet up into rags.  For those of you too young to know better, before there was such a thing as paper towels we had rags.  There were even rag peddlers.   They sold other things as well.  In fact, you can still buy rags.  We sell rags, though we don't look like this: 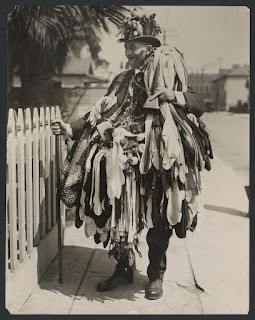 And even though Covid 19 is still raging through the country, the Idiot Jerk in the White House has pivoted to 'the economy.'   This makes sense.  He's far more interested in money than in human lives.  His history clearly demonstrates his lack of concern, his disregard, for the human soul.  In his mind, back when he was hosting his shitty reality show, every time he got say "you're fired," he was actually saying "off with your head."  I suspect that in his mind he has always been "The Chosen One."  Cracker Jack Evangelicals telling him that merely cemented his insanity into reality.
Until, of course, he suggested injecting disinfectant into your veins as a way of killing you off quicker than the virus could.  You do know that's what was going through his head.  What the world saw was merely a little Freudian Slip.  We all got to see his variation on Ebeneezer Scrooge's view

“If they would rather die,” said Scrooge, “they had better do it, and decrease the surplus population.”—

Because the economy is far more important than human life.  His brief mourning period is what they're calling it.  The scientists who warn us are no longer by his side on the briefing stage.  Human life has no value to him.  He and his party care not about the lives lost, for them the Holy Economy is all important.  Lives will continue to be lost.  They will try and sweep Covid 19 under the carpet.  If they don't talk about the virus, it will go away.  Isn't it a good thing they are a minority group who can be voted out?  Vote Blue this November.  Vote he and his party into oblivion.
Posted by Dave R at 7:23 AM