The jockish side of me

Holy Crap!  It's Saturday, the first Saturday in December and today is Kid's Workshop... and I forgot to ask off.  Son of a bitch!  Now I'm going to have to go listen to hundreds of little hammers pounding for 3.5 hours.  Sometimes they do painting projects instead of building projects, that's quieter but clean-up for the store can be very time consuming.
My new clock comes today.  I ordered it specifically for the shelf in front of my Cannondale.  When I'm pedaling away, I just want to be able to look up and see what time it is.  And speaking of rides, Rouvy introduced 2 new ones yesterday, in Italy.  Unfortunately, they're group rides, meaning they're only at certain times of the day and you have to connect with a group of riders.  Well, the times these rides are offered are a bit on the inconvenient side, and I like to just climb on the bike and ride.  Rats!  Since I wanted to ride in Italy, I did a ride search.  There are over 100 routes to choose from.  I selected a ride from Zevio to Verona, about 15 miles, fairly flat.  Monday I'm planning on riding up a long hill in Italy.  That should be fun.
Today is my parent's 68th wedding anniversary.  That's right, they got married on Pearl Harbor Day.
I don't know if it's part of the aging process or not, but a while back my toes began moving back and forth inside my shoes.  I suspect my cycling may have something to do with it.  Or, perhaps it's the arthritis in my lower back.  Anyway, when I'm walking around at work, my socks rub them and on more than one occasion I thought I might be on my way to getting a blister.  So, I bought some Kineseology Tape.  You know, the sort of things jocks wear?  And I've started taping my toes.  All of a sudden, no problem. 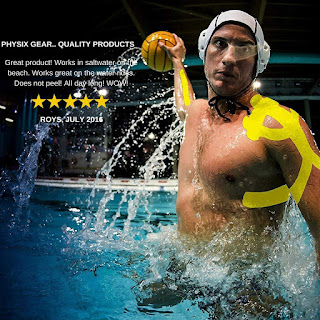 Mine is red, one of my favorite colors.  The water polo player was not included in the box.
I read where the Idiot Jerk in the White House and his administration are refusing to get involved with the Impeachment process.  This was to be expected.  The Democrats need to send the articles of impeachment to the Senate as fast as possible.  Throw the ball in the the Republican Court.  Believe me, the Republicans are going to vote it into the history books as fast as possible.  There will be no, long, drawn out trial.  While they would love to attack, attack, attack, they're know such a thing would do more to hurt the Idiot Jerk and help Biden.  Having a trial would cut their open for the public to see and hear.  A lot of them are already scared shitless.
Oh, and I see Duncan Hunter's is going to resign which means there is going to be one less Republican in the House.  Oh, now isn't that a shame.