Here it is... Monday.  Some of you are going back to work for a day, or two.  I have been scheduled off.  I was off yesterday as well.  Did little, except for our store's Holiday Party.  As I age, I find I'm less and less of a party person.  Ours has been at the same venue for the past 5 years.  They always order the same menu.  Desert was either chocolate or carrot cake., both mass produced.  I've baked carrot cakes.  They're very moist, but there is texture.  Like this: 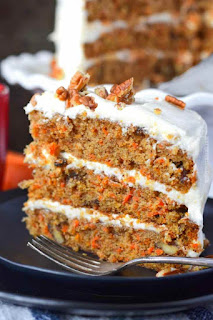 The carrot cake last night was more like a boiled pudding which had been way over-cooked and the artificially flavored cream cheese icing was... about as palatable as the cake.  Nothing changes.  Same thing goes for the music.  Meh.  One of my fellow associates sitting at my table said of the music:  It's okay to dance to, but I would never listen to it.  Sorry, but I listen to the music I dance to; I don't shut down my brain to the notes being played and lyrics being sung.  Oh, and it's all about sex.  I can remember when dancing used to be about having fun, when there were many focal points, now every song seems to be about banging bimbos.
So, what's planned for today?  Some grocery shopping.  Some cleaning.  I have a rocking chair up in the attic which used to belong to my Mom.  I'm giving it  away.  That's one less thing up there to get rid of.  And, of course there's going to be a ride.  I have no idea where or for how many miles.  What I do know is that I stepped on the scale this morning and... Let's just say I need to burn about 50 million calories.
If you leave a comment you'll see I've begun moderating again.  I had hoped maybe our troll had moved on... nope.  Obviously the poor thing doesn't read much since his comments never relate to the blog.  They don't seem to be anything more than a puerile attempt at crude humor.  I wonder if he's one of the Russkies who so often show up in the stats.