Heaven in your Mouth

I slept in the morning.   At 0500 my alarm started chirping "good morning, the time is 0500," and I turned it off.  I've a lot planned for today, but I didn't want to get an early start... if that makes any sense.  Neither did the dogs.
Mrs. Puff's house, across the street from mine, has been sold.  And yes, her name was Mrs. Puff.  A U-Haul pulled up in front last night and a couple pieces of furniture were carried in by two men.  The streetlight up around the bend was out, so they didn't have a lot of light.  Of course, the dogs were out barking.  I suspect the truck will return, probably this later this morning or this afternoon.
Sundays are always quiet days for politics, unless the Idiot Jerk in the White House begins Tweeting some sort of bullshit.  I think an interesting thing about this impeachment is the Republicans desperately want to compare it to Clinton's.  Main differences:  they kicked a dead horse for a very long time; Clinton was fairly popular, except among a minority group called Republicans; The 'dot.coms' hit and everybody in the country was making lots & lots of money.  None of those are going to happen.
And I've been craving coconut custard.  I love coconut.  However, I didn't really feel like putting the effort into baking one.  Instead, I opted for making something akin to a custard / pudding with real whole milk, real eggs, and real butter... and a lot of sugar.  Yum!  I should write this recipe down because this is heaven in your mouth.  In other words, this is calorie Hell. 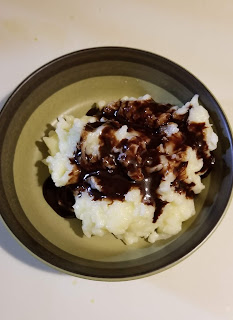 The chocolate sauce on top (Hershey's, of course) gives it a Mounds Bar flavor.