Okay, so today is Thursday... it seems like only yesterday it was... Thursday.  It is Thursday, isn't it?
My 2020 Roar calendar arrived yesterday.  Roar used to be Warwick Rowers.  They've grown.  Now there are coyly posed naked men from other rowing teams, as well as other sports, gracing the months, including Team Sky sports.  I was curious to see if there were any cyclists included, however this year they didn't identify the men.  At least not on the print copy.
And, speaking of cycling, I rode 20.23 miles yesterday as part of one of the challenges I need to complete to move up to Elite cyclist.  It took me 98 minutes.  My legs didn't bother me nearly as much as my butt.  Son of a bitch!  I could feel every stitch of fabric in my shorts when I was finished!
Last night I went to see "Knives Out."  It's a mystery with some serious comic overtones.  I enjoyed the film immensely.  The acting is top notch.  Don Johnson is in it.  I haven't seen him in anything for a long, long time.  He's aging well.  A clean shaven Chris Evans is here too, with really pink lips.  I'm glad to see he's getting roles outside of the 'superhero' genre.  Toni Collette is amazing as Joni, one of the siblings squabbling for a piece of the inheritance pie.  I love a good mystery, and this one's good.  There is a treasure trove of clues and red herrings which delightfully confuse and lead the viewer down the wrong garden path.  And dogs, of course, in fact, one of the first things you see are the dogs. 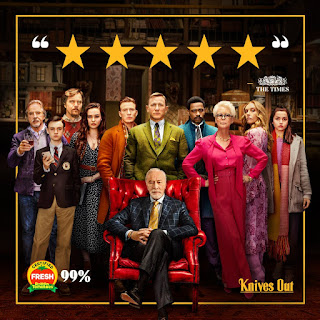 And I saw where Justin Timberlake made a public apology to his wife for holding hands with someone else.  Can you imagine that?  He found himself suddenly being attacked by all those social media knives.  They are now both judge and jury as to what he can and cannot do.  As I was reading that snippet, I began to wonder just who these people were, the one who dictate to Justin how he lives his life.  It took me all of about 2 minutes.  You see, right after seeing that headline, I went over to Amazon to look for a digital clock for the cycling room.  Lo and behold, they were advertising the Chris Pratt store on their Home Page.  The Chris Pratt store?  That's when I knew just who exactly Justin was afraid of... the same group who buy shit from the Chris Pratt store.  Not too smart, but easily influenced by celebrity.  The last thing their idols want is for them to pull out their sharp, little, vengeful knives.
Just like the Idiot Jerk in the White House, who for so many, many years enjoyed wielding the knife.  Now barely a minute goes by without him being pricked.