The Dog at the Top of the Stairs

Today is Tuesday and it's my little Friday - little because it's at the end of a 3 day work week.  Tomorrow my weekend begins.  This means my next 40 hour work week starts on Friday.  Which is going to be a bit of a groan day for me.  My brother-in-law bought tickets for a chick concert on Friday night for he and my sister.  She doesn't want to go, so I got her ticket.  Someone named Grace Potter, no relation to Harry as far as I know.  I watched one of her videos and there wasn't a guy to be seen, hence my calling it a chick concert.  I'm not saying there aren't going to be men in the audience, just that we might be a minority.
Of course, after seeing Elton last Friday, comparisons are going to be made.  There's no way of avoiding them.
Outside right now we have drizzle.  The temp is going to drop as an arctic blast sweeps east.  Hopefully Thursday will be warm enough for me to mulch my leaves.  Coming home from work yesterday I was stopped by one of my neighbors who remarked on my amazing ginkgo leaf drop.  "It looks like a golden blanket on the ground," she said.
Last night as I was heading up to bed I saw Lily standing at the top of the stairs, with a toy in her mouth, so I took a pic.  My mind immediately flashed on that old thriller "The Dark at the Top of the Stairs." 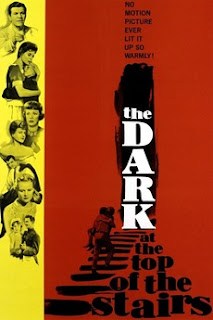 Here's my version.  I call it "Dog at the top of the Stairs." 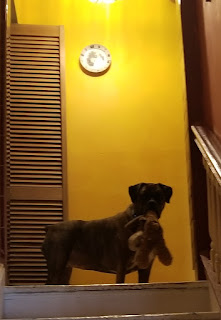 Cute, huh?
Anyway, I saw the courts handed the Idiot Jerk another defeat in regard to his taxes yesterday.  A day doesn't seem to pass without someone handing that scumbag more bad news.  Now, doesn't that warm the cockles of your heart?  If he hadn't been such a dirty crook all of his life he'd have nothing to worry about.
Oh, and I saw the Junior Idiot had to cut short some sort of book presentation because of protesters.
He actually said there was going to be no Q & A because people would weaponize his words.  I had to laugh at that.  I mean, he'd have no worries if he wasn't such a shit stain.  I'm sure the realization has set in for the Idiot Jerk's family.  Whereas when I look up the staircase I see a cute little Boxer with a toy in her mouth, when they look up the stairs all they see is deep, frightening darkness.
Posted by Dave R at 6:23 AM

Email ThisBlogThis!Share to TwitterShare to FacebookShare to Pinterest
Labels: Donald Jr, Donald Trump, Elton, Grace Potter, Lily, The Dark at the Top of the Stairs.