Don't try and snow me

Well, it's Wednesday and not my Hump Day.  Because tomorrow's a holiday, I doubt if there are too many out there doing the Hump day dance.
My new schedule was posted yesterday and I'm back with my consecutive days off.  Oh, happy me!  As for this week, Thanksgiving week, they're allowing individuals to get Overtime (a rarity).  I was asked if I want a few extra hours.  My response:  (long, slow pause here) no.
Colorado got snow!  That's nice.  Another storm the Weather Channel decided to name dumped upwards of 17 inches through most of the state... and the storm is moving eastward.  We might get rain.  Some are making a big 'to do.'  Excuse me people of Colorado, but you're in the middle of the Rocky Mountains, you get snow.  Trail Ridge Road, one of the rides I have downloaded, has warning signs "closed during the winter" because of snow.  That's right.  This is a 2 lane highway is usually only open from Memorial Day to Columbus day because of SNOW. 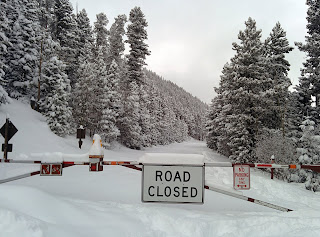 Ooops.
Last evening I was riding Oberschwaben - Kempton, in Deutschland.  Considered a hill ride, there are lots of smaller hills and valleys leading to a long climb at the end of the 27.7 mile ride.  That will be a long ride, about 2 hours in the saddle.  I rode about half last night and my legs felt fine.  The countryside reminds me a lot of Central Pennsylvania. 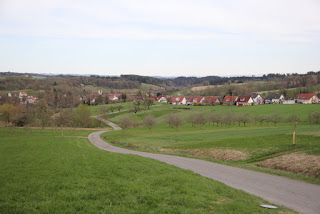 I guess Melanoma was booed... loudly, at some sort of Opiod Crisis meeting.  You realize that when she met... and married the Idiot Jerk in the White House, she thought she was getting a really sweet deal.  Wrong.  And you know he forced her to sign a pre-nup from Hell.
Oh, and I saw where Jared the Joke Boy has been promoted to an even bigger Fail.  That's how the LA Times put it: Promoted to a bigger Fail.  His scurvy style as a mid-east peace interloper failed, so the Idiot Jerk in the White House has put him in charge of getting the Wall built.  You know what they say?  Once a failure, always a failure.