Here in Central PA they're forecasting a drizzly day... wow.  I'm excited.  I work so the weather really doesn't bother me too much.  The next 2 days are supposed to be partially sunny with the temps in the mid 50's (F).  I'm off, so that will be nice.
Thursday is my Uncle's mini-viewing / service.  I'm hoping to not spend more than an hour at the Funeral Parlor.  I've always found that rather morbid, sitting through a memorial service in front of an open casket.  Some people have this really odd belief they need to get one last look at their loved ones before internment...  even if they look about as real as either Ken or Barbie.  Sorry, but memories should be based on our younger years, before age begins to slowly take toll, before there are wrinkles, and grey hair, and bald spots.   I do that a lot at work, look at older people and wonder what they were like in their youth, when they could dance the night away.  Not that I have any problem with aging.  I'm going to blow through my senior years with as much excitement and energy as possible.  This is what life is supposed to be about, not worrying about your cholesterol, or blood pressure.
I just read through some interesting reports about stents and by-pass surgery and how they really don't do anything to extend your life.  They do make doctors and surgeons a lot of money though.  Oh... sorry for the bad news Bernie.
And I thought I'd model another pair of socks for you.  These are my Bigfoot socks. 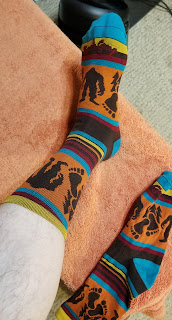 Snazzy, huh?  I'll  be wearing these in about 10 hours on my evening ride.  And doesn't my leg look awfully fat?  It isn't.
And I saw the Idiot Jerk's administration has decided to go against International Law by giving a big 'thumbs up' to settlements by Israel.  This is once again something geared towards his minority Conservative base.  There's some sort of prophecy which states that the 2nd Coming will happen after all Jews have returned home.  That's never going to happen.  If you look at the emigration stats of Israel it's fairly obvious that while new kids are moving into their block, even more are moving out.  The Conservative religious grip is growing tenuous.  People don't want to raise their kids in a war zone, neither to they really like the mandatory military service.  Of course, you try telling that to the Crazy Christians in this country and their eyes just go blank.  Those words don't even register because they don't jive with their personal beliefs.
Posted by Dave R at 6:42 AM