It's Tuesday.  Here in Pennsylvania it's election day.  Celebrate by going to the polls and voting Blue.  Remember, voting straight ticket here is a vote Republican liars like Lisa Grayson.  Put your vote to good use.  In Cumberland County vote for Susan Pickford, she's an Independent, a human being who hasn't sold her soul to the moral degenerate in the White House.
While I was riding my bike last evening, the chain popped off.  This is an easy fix, but when something like that happens it throws me out of sync:  I have to unclick my shoes, get off the bike, pull the rear derailleur down and put the chain back on the sprockets.  Chains are greasy and that gets on my fingers and... well... son of a bitch!  As a result, I only rode 8.4 miles (or there about).  The only good thing to come out of it was I realized I need to buy more latex gloves... 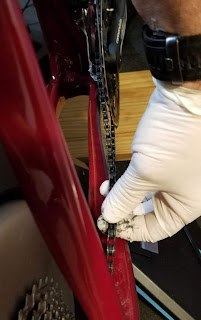 You didn't really think I was going to get my fingers greasy, did you?
I saw where the Idiot Jerk is once again supposed to release 10 years of taxes.  Of course, he's going to appeal that decision to the Supreme Court.  No one thinks they are going to halt the release.  So, will he comply?  This will be interesting.  There is so much dirt in those taxes.  Lies and fakery abound within those deductions.  You can bet that Stephanie Grisham is going to sing how it takes a genius to find so many varied ways of cheating the government.  She has to praise him, you know.  We all know.  The only way to keep your job is to bow and genuflect whenever you're in his presence.
Oh, and he was in the land of Kim Davis last evening pleading for the MAGA heads in that state to vote their governor in for a 3rd term.  Kentucky is supposed to be deeply red... so... why was he there.,, pleading.  Oh, wait, it seems that Matt Bevin, the sure thing, is in trouble.  Andy Beshear is tied in the polls.  Hence, the reason behind the Idiot Jerk having a rally.  Today's election day in that state... we'll have to wait and see if it goes blue. Could be the Idiot Jerk knows his fat ass is soon going to be in the fire poppin' and sizzlin' for all the world to see.