My weekend begins today!  And it is chock full of things to do... like laundry, though I've been attempting to do several loads during the week in order to open up free time on... my weekend.  I'd better enjoy this one since I've been scheduled to work 2 weeks with split days off.  After that, my weekends seem to have been moved back to Sundays and Mondays.  That's fine with me.  I just want my consecutive days off.
I some of you have been waiting with baited breath... so I'm pleased to announce that a decision has been reached in regard to my use of soaps.  Will it be Dr. Squatch... or Marlowe?  Dr. Squatch has really great commercials geared towards a niche audience.  Marlowe doesn't have commercials.  Dr. Squatch is square.  Marlowe isn't.  In spite of a bare chested man rubbing his fingers across his torso spitting accolades about the lather Dr. Squatch creates... there isn't any.  Marlowe has lather.  Dr. Squatch has a nice scent... but after a few minutes my sensitive nose picked up the underwhelming odor of lye....  Marlowe brags about "no cruelty," while Dr. Squatch only has a small mention on their website.  Can you see where this is heading?  While I like the commercials, Dr. Squatch comes across as just another trendy product.  Don't you hate being let down by something for which you had very high hopes? 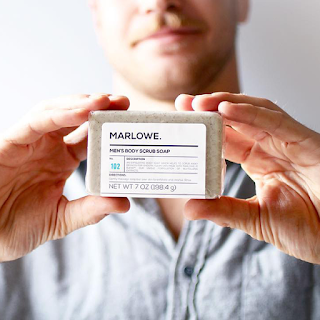 Yesterday was not a good day if you're an Idiot Jerk in the White House and hearings are underway regarding a possible impeachment.  Today might possibly be worse.  Son of a bitch!  In case you're wondering, this is why he went to Walter Reed.  His fatty, little heart is palpating horrendously at the thought of being humiliated by being fired.  He knows that without the loyalty of his base he is nothing more than a shit stain on a dirty pair of boxers, or panties, just waiting to be washed.  He dreads the approaching revelations of 'spin dry.'  This is Karma of a man who never learned.
Interestingly enough a large majority of Americans (approximately 71%) now say he did something wrong, something un-American in that phone call to the Ukraine.  Even more interesting, it seems that a majority of that 71% feel he should not be impeached, rather, they feel the American people should fire his ass, not the House of Representatives, and not Congress.  And states are already gearing up for the election of 2020.  Turn out is expected to be very high as Americans line up to vote.  We want to skip the wash and rinse cycles and jump right into the spin dry cycle.