Word of the Day

Yesterday was one of.... "those days."  I went in to Holmes Cyclery to pick up my T-shirt, the one Trek bikes gave me for riding more than 100 miles in July.  The store has undergone a large renovation - it's very modern now.  My description of EZM Cyclery is based on the way it looked for years, and old store from the 1920's.  I didn't say the word of the day because... well, I was happy to pick up my gift. 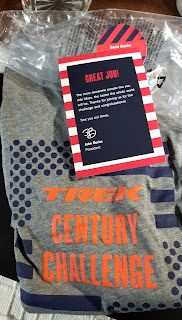 I went to the store, did 4 loads of laundry, a little cleaning.  Got everything ready to make a quiche for dinner (mushrooms, asparagus, and Swiss cheese), and then went upstairs for a ride.  Squeezing my rear tire, I though it might be able to use a couple of pounds.  Bicycle tires have tubes so you don't really need to worry about them once they're pumped up.  Occasionally, though, you do need to add a pound or two.  I unscrewed my clutch knob to release tension on the back tire and grabbed my pump.  It didn't take much.  As a went to tighten my clutch knob, it clicked once and then spun freely.  Word of the day.  That's right, the damn thing broke.  I've had this trainer for 21 months....  I've only put air into that tire, oh, maybe 8 times.  Word of the day.  So, I went to the Cycleops website to see if I can order a new knob and... this model is "no longer available."  Word of the day.  I called Cycleops and they're send me a new clutch knob because it's still under warranty.   This surprised me.  The clutch knob is one of the things the warranty doesn't cover.

I was more irritated rather than angry.  If I start to take this bike out on the road rather than the X6, that new knob is going to get turned quite a bit, which is why they're not covered in the warranty.  Word of the day.  The end result was I started looking at other trainers, ones that don't require a clutch knob.  And I began to rationalize the expense of a new trainer.  Sometimes that's an easy thing to do.  Of course, that also meant pondering about upgrading as well.  Till all was said and done, I ended up ordering one of these: 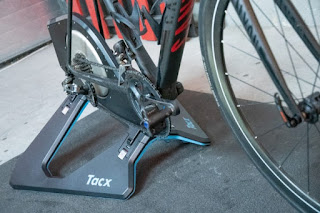