Showers were forecast for yesterday afternoon... well, the showers arrived early and by the time the afternoon rolled around we were having some serious rain.  More is forecast for this weekend.  My lawn is looking bright and green so I might end up having to pull out my lawn mower for a mid-fall mow.
There's no dog walk this morning because everything is still wet.
I got my free Flu shot yesterday from the VA.  The Out Patient Clinic was very crowded.  I parked in the lot across the street.  Oh, and I was the only one to show up wearing shorts.  Everyone else was in jeans or slacks... some were even wearing jackets.
So, the 2nd snaky part of "The Body in the Well," is finished, at least the rough draft, and I'm heading into the finale.  And, of course, I'm already thinking about the next one.  It's probably going to be set in Beverly, Mass, near Dorchester Bay.  I have a great opening sentence:

I am an unknown, unimportant individual hanging onto the fringeworks of your life.

Nifty, huh?  Of course, that is just the first tintinnabulation of some serious bell ringing to come.
And, speaking of ringing  bells, I bought a couple strings of small ones recently to drape across a mirror I have hanging in the hall.  Here's what they look like? 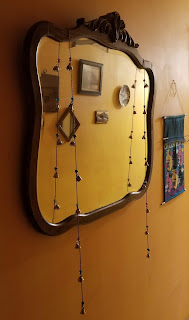 Oh, and yes, my upstairs hallway is painted a snappy, bright, wake me up yellow!  It's do for a refresh.  Knowing my penchant for color, it might turn into some sort of exploding orgasmic green.
Oh, and speaking of bells, the Idiot Jerk in the White House appears to be having his rung daily.  Yesterday there was more damning testimony by Bill Taylor, a man who takes detailed notes.  I looked over the transcripts that were released.  I chuckled a bit when Taylor said he was told by Sondland not to worry, "this is business as usual."  Ding Dong!
And the Idiot Jerk compared the impeachment inquiries to a lynching.... oooohhh, yes he did.  That gets a big DING DONG (in caps, of course).
Evidently his inner circle is advising him he needs to bring on board an "impeachment adviser" and he's refusing because he believes it will make him look guilty.  Ding dong, Ding dong. (That's a double just for the fun of it).
There was a surge of Independent voters now approving the impeachment investigation.  DING DONG!  So far they've been sitting on the sidelines.  Now that they're realizing this shit is deeper than they thought, they're nodding their heads and saying "go for it."
Oh, and evidently there's been a large influx of cash into the Democratic races throughout the country.  So much so, seats once considered locked and loaded and ready for red are now considered competitive.  Ding dong, ding dong, ding dong.  If the Reds thought the Blue wave in the last election was bad, they need to begin preparations now,  In 2020 they're going to be enemized!
Posted by Dave R at 6:32 AM