Slowing them down... in his words

Well, it looks as though I won't be going in to work today.  My new Tracx Trainer arrives, courtesy of FedEx.  A signature is required so I will be home.  I already told them yesterday at work, but will call again in about an hour to remind them.  In case anybody is wondering, I won't be lollygagging around the house today.  There are things to do.  My red Synapse needs to be taken off the old Cycleops Magnus trainer.  I have to order a tool to put the Shimano cassette on the new Tacx.  And I'm thinking of getting a mat to put underneath the bike.
There's also the new software to download.  For those who don't know, Tacx is a Dutch company (yep, this trainer was manufactured in the Netherlands), that is owned by Garmin.  I have a Rouvy app right now.  Tacx has it's own application.  I will need to check both out and see which one best fits my needs.
As for the Cycleops Trainer?  An associate at work said she'd take it....  I don't see her using it.  Believe me, that's important to me.  This year alone, I've put over a thousand miles on the Cycleops.  Figuratively speaking, this trainer has been all over the world.  I want to make sure whoever gets it puts a bike on it and rides.  Riding On... you know?
There was some bad news yesterday in regard to the economy.  Manufacturing is slowing down.  Oops.  Almost everybody knows this is because of the Idiot Jerk's tariffs.  Get ready, he's going to blame it on the impeachment inquiry.  Like a true Conservative, every inch of bad news is the result of Democrats' investigation into his corruption.  If Lorenzo happens to hit the US mainland, it will be because of those damn Democrats.  I don't know about you, but I'm beginning to enjoy this.  I'm also betting there haven't been this many 'F' bombs exploding in the White House since Tricky Dick Nixon realized he was in the same leaky boat.  I do have one suggestion.  If he, and Ivanka Danka, and Donnie Jr, and the rest of his spawn try to run when the realize their end is near, we should probably shoot them in the legs to slow them down.   🏃‍♂️🏃‍♀️🏃‍♂️
In other chirpy news:
The temps are forecast to reach 90 (F) today - and it's October and my Central Air is still running.
The North Koreans fired off another missile... from a submarine.
And I still have roses. 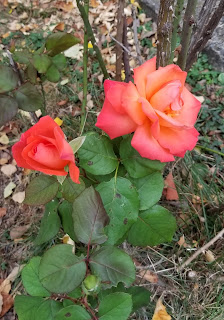