Okay, so it's Sunday.  Depending upon which one of the apps I use for my cycling and fitness it's either the end of the work week, or the beginning of a new week.  My schedule for work says today is  the last day of the week.  Celebrating now religious fervor, Sunday, for me is the conclusion of the past week.  Tomorrow, everything begins anew.  Monday is a brand new day to start tracking my mileage.  Over the past 7 days I rode 43 miles.  That's only 4 days of riding.  I had a bit of a cranky belly one day.
My money's saying Boris Johnson has a bit of a cranky belly today.  I sold a carpet measure to an Irish woman yesterday.  I asked her what she thought of this Brexit fiasco.  She told me she thought it was terrible, but her sister who lives in Ireland was ready to grab Boris by his ears and rip off his head.  Evidently he sent an unsigned letter to the EU yesterday asking for an extension...  He's not feeling the love this morning. After years of mocking those he deemed failures, they're serving him up a shit pie breakfast.  As the days roll on, Boris' belly is only going to get crankier.
Do you know who else has a cranky belly?  The Idiot Jerk in the White House. 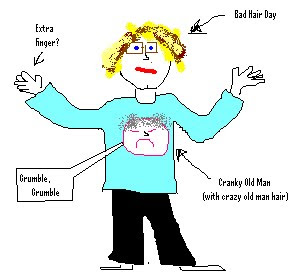 There's no way he's going to be able to take his frown and turn it upside down.  Nope.  He's no longer going to be hosting the 2020 G7 at his golf resort... club... or whatever the hell he calls it.  He changed his mind because of the "media and crazy, hostile Democrats..."  This morning he's no doubt chugging the Pepto-Bismol.  The idea of foreign governments paying him money to sleep in one of his hotels, and eat in his restaurants, and using his room service is ducky dandy for him.  Do you really think he cares about laws, about rules and regulations?  He's a Conservative.  His favorite pronoun is 'my,' as in 'my money,' and 'my bank account.'  I wouldn't be surprised if everyone in his spawn clan were chugging the Pepto this morning.  Son of a bitch!
Posted by Dave R at 5:50 AM