The Body in the Tower

My timer was a bit off.  Actually, the electronic version was up yesterday, all I'm waiting on right now is for the paperback version to be ready.  Hopefully, that will be live and ready for purchase by later this afternoon or tomorrow morning.  If you purchase, please be good enough to leave a review, they do help advertise the book.  So, without further ado, I give you The Body in the Tower.

The thought of following the Tour de France, from the first stage to the last, seemed like a great idea.  What better way to spend a 30-day vacation in France?  But then an early morning phone call from Walker Beresford to her mother changed everything for Eli and Max.  A man had been shot at the Eiffel Tower and the Paris Police have taken Walker and her fiancé into custody.  Complicating things, the police are worried Eli’s going to run off half-cocked and get himself killed, and a germaphobic computer genius shows up unexpectedly.  With only a week to go until the 100-man peloton reaches the streets of Paris, their investigation takes them from the lofty exhibit halls of the Louvre to the blackest depths of the catacombs, as they race to solve the mystery of The Body in the Tower. 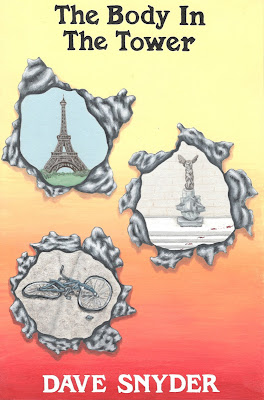 Now you know what's inside the bullet holes.

Email ThisBlogThis!Share to TwitterShare to FacebookShare to Pinterest
Labels: The Body in the Tower