Well, it's Friday and there is no rain forecast which means there should be no tornado warnings and no flood warnings.  We did get some substantial downpours yesterday afternoon, but nothing pressing enough for us at the store to 'head to higher ground.'
My, aren't things ramping up in the Trade Wars?  Now, the Idiot Jerk in the White House wants to pop a 5% tariff on all goods coming in from Mexico because he hates them Spanish speaking brown people.  That's going to hurt, but then he likes hurting people.
I saw Kim Dumb Shit purged people who he blamed for his failed summit with the Idiot Jerk... and for him the easiest way to purge is to execute.  I don't know if he fed anybody to the dogs, but I'd say that's a possibility.
Oh, and apparently the racist reason for the citizenship question on the next census is seeping to the surface:  gerrymandering.  That's right. White Supremacist Republicans are looking for a way that will make gerrymandering voting districts easier, they want to insure every white vote gets counted.  They see no value in Spanish speaking voters.
And Sean Hannity tried to excoriate the media last night.  The Idiot Jerk in the White House has been having a really bad couple of days and Sean is pissed off!  Actually, I think all Republicans are pissed!  Of course, they're going to blame the media rather than the Idiot Jerk in the White House.  From Mueller's refusal to exonerate the Idiot Jerk, to the Navy having to move the USS John McCain, to Tweets admitting the Russkies helped him get elected (since been deleted), the amount of shit coming out of the Idiot Jerk has surged to a level akin to diarrhea from hell.  And American Voters are looking at this and saying..."Hell, this guy's a real shit bag."
Anyway, still no news from KDP on when the paperback version of The Body in the Tower will be ready for purchase.  They say it can take up to 72 hours.  Patience is a virtue.  And don't forget those reviews.  They actually create a cascading effect, more reviews lead to higher sales which, hopefully, lead to higher sales.
Finally, a palette cleanser.  I have a white rose bush and in between the storms yesterday I took couple of pictures. 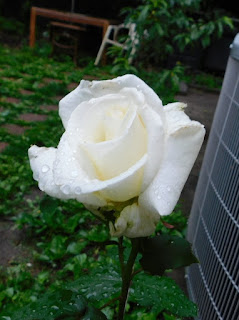 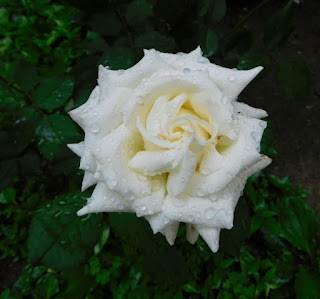 Now, ain't that nice?  Their heady scent perfumes the air.
Posted by Dave R at 6:40 AM