Golly Gee!  Today I begin a 6 day stint at work.  Can you see the level of my lack of excitability?  Six days.  Shit.  Then I have 2 days off before I get to work another 6 days in a row.  This is really bad retail scheduling.  Sometime in that 2nd stretch I may have to take a personal day to break things up.
I went to see John Wick 3 last evening.  The movie made a lot of money this past weekend.  For those who don't know, the John Wick series of films is an over the top, uber violent on a comic book level, about a paid assassin who left the business... kind of, until someone kills his dog (movie one).  The amount of violence is laughable, seriously, you find yourself laughing.  This is not high drama... shit, this doesn't even qualify as low drama, but it is entertaining for the most part.  Towards the end the fight scenes did tend to drag out, so on the next installment I'd recommend they practice smarter editing.  For those interested, Keanu Reeves is... well, the same as he's always been.  He is not known for his acting abilities.  His career has survived for so long (like 40 years) because of his ability to choose parts which do no rely on his dramatic skills.   Any sentence more than 8 or 9 words is a stretch, which is fine since dialogue is always where he fails.  I'm sure he prefers his scripts to be about 12 pages long: (fight in library), (fight on balcony), (fight in stairwell) "Oh, shit," (fight in elevator), (fight in alleyway).
Yesterday was election day in PA, all local.  In my precinct we use computerized ballots, however I was told this was the last election for them, that next year we're going to get new voting machines.  I'm sure the Russkies are already working on ways to screw up the 2020 election, so we'll have to see if they can be hacked.
And I saw where some American fighter pilots chased away some evil, Russkie fighter pilots up near Alaska.  Believe me when I tell you this is all part of the Idiot Jerk's blow bro Vlad's plan to disrupt America.
And finally, a few more of my garden pictures.  As I said, the roses are starting to paint things bright with color. 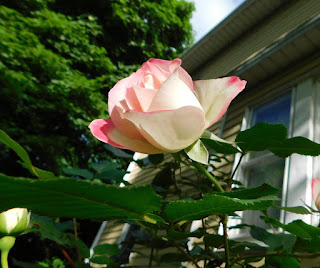 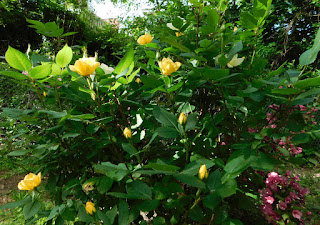 Now, ain't that nice?  Last year the rains of May pretty much washed them all out before I could take pictures.