Okay, so here it is Sunday morning and I've got a load of white wash in the washer.  Biggie is standing beside me pesting to have his head scratched.  In a few seconds, he will lay down and guard the door to the computer room from that evil Lily.
There's a lot of concern that John Bolton, one of the Idiot Jerk's favorite henchies, is spoiling for a war with Iran.  If one comes, it will be interesting to see how the Evangelicals handle it.  I mean, they're the ones who keep telling themselves he was sent by God to give them what they want, and if that's the case such a war would be a Holy issue.  I'm wondering how many of those phony devotees of Evangelicalism will send their children off to fight.  My money's saying those volunteers are going to be few and far between because in their little, black hearts they are gutless. They don't want to go and possibly get themselves killed for their beliefs.  No way.  They're going to leave that job to someone else, someone who's not as special, which is why they are so much worse than a cowardly embarrassment.
So, I'm probably going to go see John Wick 3 on either Monday or Tuesday.  It's getting good reviews.  Now hows that for a stunner.  This is a movie filled with over the top, comic book violence.  Still, I have to admit, it's far more believable than one of Tony Perkins' spawn volunteering to go to war for this country.  That will never happen because they're just too.... special.
Oh, my the evil Lily has entered the room... and Biggie's laying snoring on the floor.
I have turned on my ceiling fans.  They will run for the rest of the spring and summer season.  Eventually, when the daily temps hover in the upper 80's I'll turn on the Central Air, too.  In the winter I like to be warm, and in the summer I like to be cool.
I thought I'd end today's entry with a shot of one of my peonies.  One of the things I'm planning on doing tomorrow (my day off) is to tie up the bush out front.  The blooms get very top-heavy and I don't want them laying on the sidewalk. 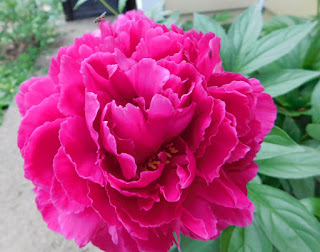