Well, today is Wednesday, my 3rd day off in a row.  Ain't that exciting.  I have a dental appointment this morning.  Also, the desk arrives today, sometime within a 3 hours window:  11-3.  It's about time!  If the company I bought it from hadn't tried to cheap it out on the first deliver, I'd be writing at it by now.
I did my taxes yesterday.  I am getting money back.  However, the $$$ are on par with what I used to get back when I was able to itemize... before the house was paid off.  With all of the 'wahooing!' and knee-slapping by the Republicans when they got their precious tax bill through Congress, I thought I might get more.... Shit!  That's Right.  I'm in the wrong tax bracket to get the big bucks!  Those bucks will be going to the likes of DeVos, and Mnunchin, and Schultz (the coffee guy.)  We know they're going to take those refund checks and buy something to help grow the economy, like those tailor made suits from a nice guy in Hong Kong,  or that handbag made of Italian leather from in Serrano, Italy.  You know, the kind of people who think Saks is just like Target, only with a better selection.
Oh, and the Idiot Jerk in the White House gave a speech last night.  Evidently he accused Democrats of not kissing his ass.  The women wore white... his favorite color, so you know he couldn't stop looking at them.  He still wants his racist Wall.  Main Stream media was fair, from what I can tell.  I didn't check, but I'm sure Faux News chortled their Hosannas the they they always do.
I did watch some clips of Stacey Abrams' rebuttal.  She was calm, and well spoken. 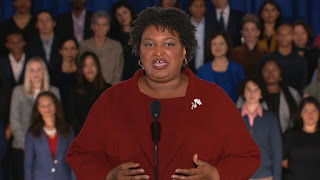 How shrewd of her to call out the 'shutdown' as an engineered plot by the Idiot Jerk in the White House.  He thought that would be a great bargaining chip.  He's always been an asshole.  I liked the fact that their were people behind her, listening to her, representing America.  I wonder how many Republicans nearly broke their fingers changing channels in order to avoid seeing her.  It will be interesting to see how she does in the ratings.
Finally, I guess the Idiot Jerk complained about all of the investigations... it seems like a new one is popping up everyday, doesn't it?  Anyway, he cited them (at least that's what he seemed to be saying) as keeping him from doing his presidential duties.  Shit. This guy has 60 Executive Hours each week.  All he does is watch Fox News and eat McDonalds.