And today's sandwich is....

Well, it's Tuesday.  I get to go to work today after having only one day off.  The thought had crossed my mind to take a snow day.  I mean, yesterday afternoon the Winter Storm Advisory was changed to a Winter Storm Warning, with 3 to 6 inches predicted.   When I pulled back the drapes this morning and looked out the window I was... disappointed.  We have maybe 2.5 inches of snow.  That's it.  I check Accuweather and there is still a Winter Storm Warning  listed, however Cumberland county is no longer included.  The bulk of the Winter Storm appears to have stayed to our west.  I'm already shoveled out, so it looks appears as though I'm going to be heading in to work.  It's going to be a slow day.  There will be a lot of noise coming from the 'swing area' to the left of our front entrance - they're setting up the patio event.  For us, February 11 screams "Spring Is In The Air!"
Evidently the Idiot Jerk in the White House held some sort of lie fest down in El Paso yesterday.  I know because I saw a pictures.  There was a large banner behind him which read "Finish the Wall."  Okay, some brave soul needs to sit him down and tell him they haven't even laid the first bricks.  How can you finish something you haven't even started?  Or, maybe there was this really big typo at the banner factory.  Maybe the banners was supposed to read "Finish Funding the Wall," or maybe it wasn't a typo, perhaps the size banner they ordered didn't have space for that one additional word.
And the Senate has reached a compromise on funding the government and while there is money for some fencing and improvements, and the hiring of more personnel, there is no money for... The Wall.  Now it goes to the House.  If they're smart, they'll approve it and shoot that bill off to the Idiot Jerk's desk.  You see, the Idiot Jerk has said he'll veto anything that doesn't give him $5.7 billion for a wall.  Do you see what they're doing here?  If he signs it, he CAVES.  If he vetoes it, he, personally, will once again be responsible for the government shutting down.  Oh, shit!  That means there's another shit sandwich on his menu. 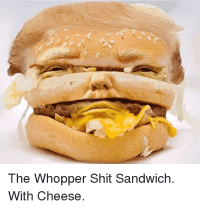 And I read somewhere, that the National Enquirer is claiming the brother of Jeff Bezos' mistress is the one who provide them with his penis pics.   Wow!  That's a pretty good way to break up an extramarital affair, ain't it?
Posted by Dave R at 6:56 AM