How does my garden grow?

Spring officially arrives in 20 days.  Woohoo!  Not that there aren't already signs.  My daffodils by the back porch already have buds, and the Idiot Jerk in the White House thinks Donnie Jr has the worst judgment... Oh, wait!  That's not a sign of spring!  Well.... maybe...    When I read that yesterday I almost burst out laughing.  We normal people have known that for years, but now, thanks to Michael Cohen, the whole world knows it, including... Donnie Jr.  I can't even imagine the size of the brick little Donnie shit when he found out his old man pretty much thought of him as a dumb fuck.
Let's head back to spring, okay?  I have roses in my front yard, this year I thought I'd plant some oriental poppies and some vibrant sunflowers among them to jazz things up a bit. 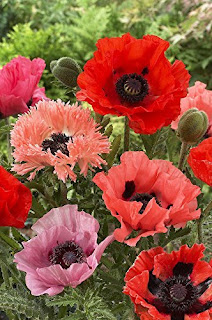 You know what I'm talking about, like when Rashida Tlaib accused Mark Meadows, a white Republican from North Carolina of using Lynne Patton, a "friend' of the Idiot Jerk's family, as a prop to prove the Idiot Jerk was not racist.  My, what a colorful conversation that was, Meadows being called a racist using a racist stunt in a desperate attempt to prove the Idiot Jerk wasn't racist.  My, I'll bet his cheeks were burning, redder than the scarlet poppies I'll be growing next to my roses.
And, of course, those seeds of futility the Idiot Jerk had hoped to nurture into blooming deceit during his "summit" with Kim Dumb Chunk fell on fallow ground.  No flowers there.  Perhaps if he'd sent Donnie Jr in advance to spread a little manure, and maybe pop a few MAGA hats on some of the Vietnamese.  Nahhh.
Yesterday rattled the Republicans terribly.  Their worst nightmares are coming true.  The Idiot Jerk in the White House, who many believe God sent to fulfill their most craven dreams, is actually harvesting souls... for the other guy.  Today, Cohen is going to speak again, behind closed doors.  Today he's going to talk about the Idiot Jerk... and Russia.  After today, they will be shaking in their boots.  Today they will get an earful on the types of weeds the Idiot Jerk has planted and nurtured.  I can tell you, there isn't a poppy, or a rose, or a sunflower in his garden.
Posted by Dave R at 6:13 AM