Today is Super Bowl Sunday - I only work until 4:30, so I'll be home, but... I won't watch.  Duh.
I got a call from the delivery people while at work yesterday.  Wednesday's the day for delivery.  They will call me Monday or Tuesday with a 3 hour window.  I'm off.  The temperature is supposed to be in the mid 40's (F)... what could be better?
This guy named Northam, the governor of Virginia may (or may not have, depending upon which of his stories you want to believe) while back in college.  Was that him in the picture?  Maybe.  Was it a stupid thing to do?  Definitely.  Are we going to publicly punish every one of those students in that yearbook?  Nope.  Except for Northam, they're all going to go about their happy, happy ways.  You can bet some of those students matured into very conservative Republicans, Northam, on the other hand, liberalized his views and became a Democrat.  A lot of Democrats say he should resign.  A lot Republicans are saying the same thing, not because they find his prank racist, but rather because they want to stake a Democratic Governor.  He says he's not going to.  Me?  I say we should let the people of Virginia decide.  Democracy is for the people and by the people.  In the next election the voters of Virginia will decide if he's racist or not.  They will look as his record.  Is it Liberal or Conservative?  Has he been a good Democrat?  The calls for him to resign are well taken, they show we hold our own accountable, unlike those Republicans who voted for Kavanaugh.  At the end of the day, however, we need to let the Virginians choose.  It's their right as Americans.
The AI on my Galaxy 8 is acting up.  Yesterday, as my alarm was going off, Bixby said "today's going to be a good day for a picnic."  The sun did come out, but the temp only made it up to 33 (F).  This morning Bixby said "today's going to be cool and cloudy," and the temp's are supposed to go up to 44 (F).  Oops.
The other day, as I was laying in bed, Seig rested his head upon my chest.  For those who don't understand... this is not a little head. 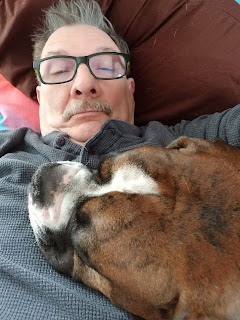