Okay, so was anyone foolish enough to watch the Idiot Jerk on TV last night?  Show of hands, maybe?  I didn't.  He's a little bit like Humpty Dumpty, isn't he?  Sitting on his wall and just waiting to fall... or perhaps I should say fail.  While not watching, I did peruse some of his his comments.  I find it interesting how deceptive he is spitting out lies aimed directly at white, middle-aged Republicans, the sames ones who voted for him.  Of course by now so much fact checking has been done they've begun archiving all of his deceits.  No longer does it take an hour or so of research.  Nope.  Now it takes about 20 seconds before they stamp his falsehoods as lies.  You know what I'm talking about, like Chris Wallace throwing Sarah Sanders' lie back in her face on Fox News.  The Idiot Jerk knows if you repeat a lie often enough, people will begin to believe it...  especially if they are white, middle-aged Republicans who will never understand the 1950's are gone forever.
I called and left a message for Justin at Greenfield (Graysonview) yesterday... no response, of course.  I will call again this morning.  I do not doubt it will be like pulling dragon's teeth to get them to refund that money.
And I worked a little more on the archway yesterday.  The front and the left side just need to be sanded.  The right side is going to need a bit more spackle.  Hopefully I will be able to paint it on Friday.
Right now they are telling me my desk should be delivered on 1/31... or there about.  Except for the archway, everything is ready... well, almost.  I have a silver candelabra that still needs to be shined.  If it weren't for tarnish, silver would be my favorite metal.  Gold is a bit too gaudy.  Copper is nice but only in small quantities.  Steel is great for its tensile strength but lacks as a decorative metal, unless, of course, you like horse shoes and chains.  And true, brass can be ever so bold, but silver is... very snazzy. Silver has elegance.  It's just a pain in the ass having to shine up it's sheen on a regular basis.
And in case anyone is wondering what I was doing last evening well... I was at the Olympics.  And while there were a few moments when I felt as though my back my be up against the wall, I was never in trouble the way the Idiot Jerk is in trouble.  Not me.  I won!  They even gave me a winner's crown, something the Idiot Jerk will never get. 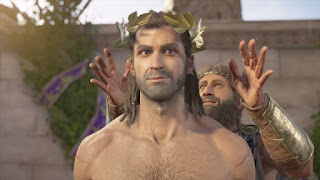 Oh, and in case you're wondering, I won wearing a loincloth.  This game is not that progressive.
Posted by Dave R at 6:46 AM