We had about 2 inches of snow last night.  I think they're calling it a teaser snow... just a little tickle, tickle, tickle of what's on the way.... well, maybe.  Yesterday they were calling for  2" - 4" and today they calling for possibly 5" but they're also saying wet and sloppy.  We all know, there are those out there who would be happy for 5" of wet and sloppy.  Me?  I'd rather have 9" of light and fluffy.
I hooked up my 'Set Top' box from Verizon yesterday.  Two of the local channels I get are Crazy Christian.  This morning, sometime, I will set up my favorites.  Those 2 channels will not be included.  I had one on the TV for about 40 seconds and couldn't help but feel sorry for regular viewers, and we all know there are regular viewers.  They're a lot like heroin addicts getting their fix.
I saw where Mike Pence and his wife were 'deeply offended' by the complaints of her new teaching job.  They are so in love with their self-righteousness they have no clue as to what will happen if they open that Pandora's Box, but then they both no doubt relish a good persecution.  Their beliefs make them incapable of understanding the human condition as they idiotically pass judgment on everyone who fails to meet their narrow minded criteria.
This morning I saw this little snippet about two white Republicans meeting with an Alt-Right White Supremacist.  This guy named Johnson has published comments stating black people have a 'violence gene.'  He says the same thing about Muslims.  Of course, the two Republicans Idiots are claiming they didn't know Johnson was wacked out on White Supremacy, that all they talked about was DNA...  I'm serious.  That's what they said.  They talked genetics with some dick (sic Johnson) who believes in a black violence gene.  These guys are walking, talking proof of a 'White Republican Stupidity Gene.'
Oh, and the Idiot Jerk in the White House says Nancy must fly commercial if she wants to visit the troops.  I don't believe his letter to her has been published, not that I would have read it, but supposedly it is filled with sarcasm.  For two years he had a White Republican House that cherished his racist views.  That's changed in a big time way.  The truth is this shutdown is hurting both him and his party... and he doesn't care.  He never learns.  Six times his LLC holdings went into bankruptcy because... he never learned.  Six times he was given the opportunity to educate himself, and six times he chose to ignore the lessons.  What else would you expect from an Idiot.
And what will I be doing on this pre-storm day?  I'm thinking of baking bread. 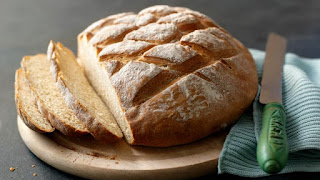